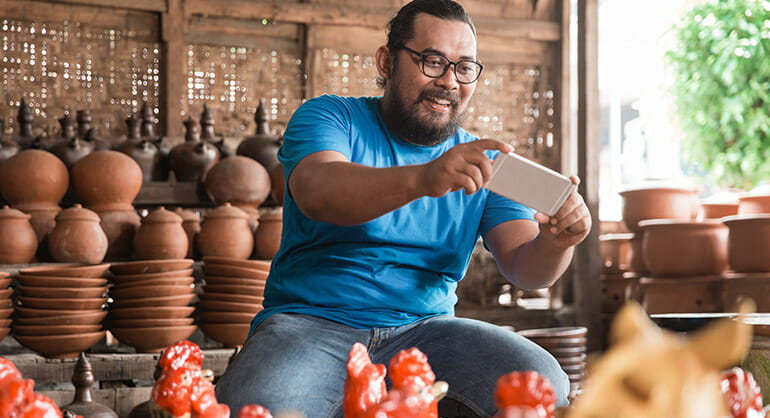 Etsy recently launched beta testing of an exciting new feature: video for individual product listings. The marketplace company, which typically focuses on handmade or vintage products, effectively kicked off the beta period on May 21st when it notified sellers of the feature.

Since 2016, Etsy has allowed video content on each seller’s shop page—essentially their version of a website homepage that lives within Etsy’s platform. The video there allows for sellers to highlight themselves and their shops, but the new video offerings in beta testing allow for each listing (each product or piece) to have a video of its own.

Of the new offering, Etsy says, “We believe that listing videos are an exciting opportunity for sellers. They’ll allow sellers like you to show your items in ways that you can’t do with photos, bringing them to life and highlighting what makes them special. We think that videos could help give shoppers even more confidence in deciding to purchase an item.”

As of June 1st, there were over 18,000 members in the beta testing group with access to the video feature. The general consensus from these early adopters seems to be that the feature is a win for e-commerce efforts. Video offers another dimension that can’t be accomplished with text or static image descriptions, especially for many of Etsy’s typically artsy offerings.

For example, any product that looks different in certain lighting, has details that are difficult to capture in a still image, or is too large for an image to show perspective would make the perfect candidate for video. One seller shared that the video option is a great addition for showcasing her iridescent items, while another pointed out that video is more effective at showing the true color of darker items.

I’m beta testing listing videos on Etsy so made this quick one of a rainbow dichroic vortex with an opal nestled inside https://t.co/B9Tq3ydjhr
#ElevensesHour pic.twitter.com/VpRbNIjmNf

While the video option is in beta testing (which the company expects to run for a few more weeks), videos aren’t visible to buyers—only by the shop owners themselves. This is by design so that anyone selling on Etsy has time to test and iterate on the video feature before it rolls out to buyers. The idea is that this makes it more likely that the video content that ultimately goes live for the public will be higher-quality than if the beta test videos went live immediately.

Just tested the new Etsy feature by uploading a video on my listing. This is amazing! Now buyers can actually see the product in action ❤️

Loving it and hope that this prototype testing will go well and we get to keep this feature. pic.twitter.com/TE9x9vYLnh

Once buyers are able to see the video content, Etsy plans to monitor the feature for a few months to decide whether it’s worth keeping long-term. Note that this feature is also only available on the desktop version of the platform at this time; the Etsy app does not support video content.

To make the best use of the video feature, here are Etsy’s recommendations for execution:

Finally, we would suggest one bonus tip, which many of Etsy’s content creators are echoing: Plan for posting videos on multiple platforms at once, so you only have to film in one sitting. You’ll want to note the specs and best practices of each platform before you get started, but you could post your Etsy video content on Instagram and Facebook, for example, with slight modifications.

We’ll continue to update this article as Etsy’s beta period continues to reflect any changes or updates. In the meantime, if you’re an Etsy seller, test out the feature and let us know what you think!

Wohoo..now we can add #video in @Etsy listing. I just tried out this new feature! It’s going to be a game-changer. I dunno if you can see it in my listing yet, but here how it looks: #etsy #newfeature #etsysellers #etsystore @EtsyIndia https://t.co/z3strsmQ2T pic.twitter.com/bHrXYXMiTT