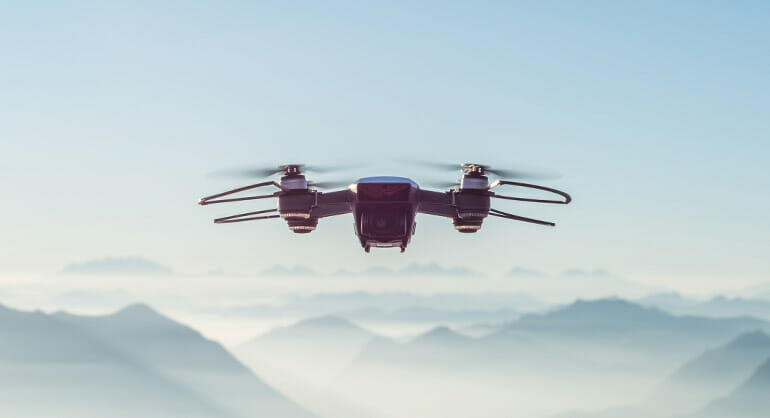 The Do’s and Don’ts of Drones

While they may still feel like something out of science fiction, personal drone ownership has skyrocketed around the world – and especially here in the United States. Looking back, in 2016 alone almost 800,000 US drone owners registered to fly, and that number has only increased exponentially over the three years since. In fact, by 2020 America is expected to surpass seven million registered drones – which almost everybody can agree is a heck of a lot of flying, whirring, buzzing, swooping sky robots.

Regardless of your personal feelings on modern drone technology, they present an incredible opportunity for video content marketers nationwide. Never before has such a dynamic piece of film equipment been available for such little money! Whereas previous generations of content creators would have had to invest in ultra-pricey cranes or helicopters to capture high-quality aerial footage, drones put that potential directly in consumers’ hands. Plus, their size, weight, and durability makes them convenient for on-the-go, low-budget film-makers of every stripe.

But in the words of Spider-Man’s Uncle Ben, with great power comes great responsibility. If you choose to create your own top-notch, affordable video content using a drone, there are a lot of do’s and don’ts to consider that can quickly become the difference between success or failure. Here are just a few helpful reminders to keep in mind as you explore the world of drone-based film-making, aimed at keeping you safe, productive, and creatively successful.

As the popularity of drones continues to explode, the Federal Aviation Administration (FAA) has had to step in with rules and regulations to prevent unfortunate accidents or misunderstandings. With recent incidents like an anonymous drone pilot temporarily shutting down the UK’s second largest airport (and risking half a decade of prison time in the process) on the rise, the fact of the matter is that improper drone usage doesn’t just put its operators  at risk – it can cause tremendous inconvenience for thousands of strangers, too.

Whether you are flying a drone for fun or profit, there are a number of regulations that “pilots” need to keep in mind. For starters, all drones must be registered with the FAA . If you intend to use your drone for profit–which as a video content marketer, you almost certainly do–an additional exam is necessary to receive Part 107 certification.

There are many FAA-mandated rules that you will need to study before hitting the skies, but to get you started, here are some of the most essential:

Stick to these easy guidelines and you’ll be able to focus exclusively on creating video content…instead of negotiating with federal air enforcement officers.

Once you’ve cleared the initial legal barriers of professional drone ownership and usage, you might think you can just leap into filming. Well hold your horses; pulling off an efficient drone shoot takes just as much prep work as any other kind – and in some ways even more. After all, while the weather is always a consideration for outdoor shoots, how often do you usually worry about your camera being struck by lighting mid-take? That’s why, days before you get on location, double-check the weather forecast. Conditions like rain and wind can frustrate even top of the line gimbal stabilizer and spoil your footage.

Weather isn’t the only factor to fold into your pre-production schedule. Drones bring a whole host of singular factors to your shoot that must be taken into account. Perhaps the most prominent of these is flight time; most commercial drones can only stay up in the air for a few minutes before they have to land and be re-charged, so make sure to invest one with batteries that fit your filming needs. Click here to see just a few commercial drones that max out closer to half an hour, and accordingly, might be better for a professional content shoot.

Beyond that, all the other classic pre-production elements of video content marketing still apply with a drone. Keep a tight schedule, know your shots in advance, and make sure that you have a permit to avoid being shut down. A drone may seem unobtrusive compared to a traditional camera set-up, but that doesn’t mean your brand can slack on the little details that make a film shoot function smoothly.

With pre-production done, it’s time to start filming with your drone. Like with pre-pro, almost all the established principles of shooting still apply: The rule of thirds, backlighting, etc. But there are also a lot of new of shots and maneuvers that you can pull-off with a drone that would be next to impossible with a grounded camera – mastering these drone techniques are what will help separate your video content from the pack.

One special technique is to utilize two axes of movement while filming. Drones give you 360 degrees of movement, which means that you can simultaneously fly backwards and down, or pan left while rising, etc. to capture slick, ultra-cinematic sequences. Another terrific technique is orbiting, which actually comes as a setting on many commercial drones. By selecting “orbit” mode, you can set your drone to circle up above while keeping a fixed point at the center of its trajectory. Like two-axis filming, orbiting is a simple way to take advantage of a drone’s built-in capacities and create uniquely dramatic footage.

Even old-school cinema techniques can get a boost with help from a drone. Check out this video by Benn TK for advice on how you can create a Jaws-style “vertical stretch” with your drone, and elevate your footage to a whole new level.

All of these techniques that we mentioned (and more) require not just careful pre-production, but advanced flight training as well. Before attempting any of them at a shoot, practice flying on your own time, when you don’t have to worry about scheduling or budgetary concerns. Even if you’re an experienced cameraperson on the ground, this is still a new, very different skill set to master. Don’t let your ego get in the way of creating the best possible content by refusing to accept that only practice makes perfect.

The more confident you become as a drone pilot, the more dynamic the footage you capture will be. Incorporate a drone into your film-making process, but do not become discouraged if you are not an instant master of the form. Because remember, ultimately drones are just a tool – it is your creative decision-making and overall strategy as a content marketer that will determine the effectiveness of your video.

home chevron_right The Do’s and Don’ts of Drones