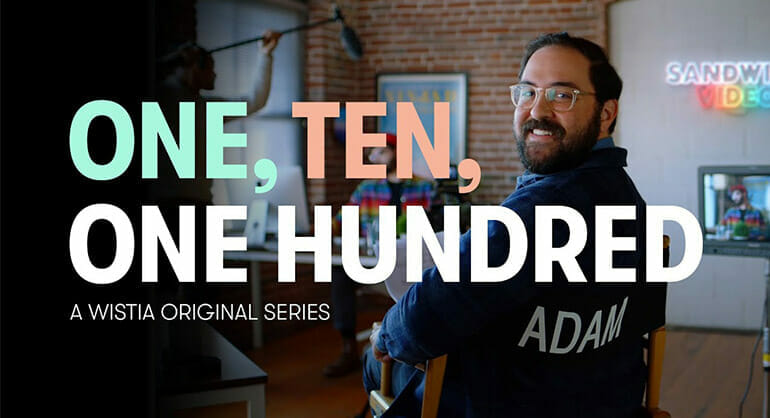 Have you heard about the fall of television as we know it? With streaming taking over our collective psyche, more people watching videos on their mobile devices than ever before, and cord cutting hitting a record high, it seems television is on its way out…

What about the popularity of shows like Game of Thrones, This Is Us, or The Walking Dead? Surely, as long as people still watch and gather at the metaphorical water cooler to talk about these shows, television can’t be dying?

Well, that might have more to do with their episodic nature than anything else.

It seems streaming has given birth not just to a new form of television-watching, but of branded content creation altogether. It’s popularized serialized content, or episodic content, which gives content creators a larger window to tell a more narrative story in episode format.

For brands, this means not relying on one single 30-second commercial to get their message heard. It means continuity and the freedom to release content, receive immediate feedback, and update content strategies to meet consumer demand. Plus, it means more creative freedom to get the perfect message across.

That’s why so many more brands are releasing branded video episodes. Today, we’re breaking down a few of the reasons behind that strategy and showing you some of our favorite examples.

First, should you even bother thinking about creating episodic content?

We’re big believers in the power of serialized videos. So far, we’ve seen the biggest success come from larger enterprise companies. Why? Creating amazing, engaging episodes takes greater resources (re: time and money), a commitment to the best video quality you can manage, and a well-thought strategy about your series’ distribution.

But that doesn’t mean only large companies can be successful. Smaller companies that are deeply committed to their content marketing can be just as successful, if not more, with the right budget and team.

Think about it. If you see a video, you absolutely love it, and you know there’s another related video being released soon, wouldn’t you be excited? Wouldn’t you sign up for release updates or check in on the channel (YouTube, Facebook, a dedicated site page, etc.) regularly to watch more?

This fan loyalty helps establish a subconscious positive association with your brand. It keeps you top-of-mind, it creates that “warm fuzzy feeling,” and it keeps those viewers interacting with you time and time again.

When you release a short commercial, it usually doesn’t live for very long (unless it’s a viral success – which is a true rarity.) You might run some ads driving to it, you might post it on your website, but it won’t have a lot of permanence outside of those channels.

Serialized content, thanks to its more creative, non-salesy, creative nature, inspires a longer lifespan. If your content is evergreen – meaning it’s always relevant and not tied to a specific time or place – it’s more likely to be shared, more likely to gain organic exposure, and more likely to remain impactful years and years down the line.

A status update, snapshot, or singular 15-second ad spot, is generally a limited experience which engages only as long as the length of the content. By expanding video content into larger narratives, marketers increase the lifespan of that content by making it feel connected to a greater context.

The real magic of episodic content? Episodes give you room to develop a story over time. Whether that means creating stand-alone episodes that are longer and each tell an individual story, or telling a story over shorter but numerous episodes, the key to both here is time!

That’s why television series are so popular. With the episodic format, you can tell your brand story however you wish, building up connections to characters, helping viewers empathize with the narrative, or going more documentary style and creating something entirely editorial that relates to your brand mission.

One short brand video might perform well, (it might have millions of views,) but that doesn’t mean it resonated well or that those watching actually enjoyed it. Serialized content gives you a detailed snapshot of what your audience actually thinks. If you see a high percentage of return visits, shares, or long watch times, you know your audience not only loves your videos, but loves the entire series and is making a concerted effort to continue engaging with you.

6 of Our Favorite Examples

Episodic content has no hard and fast rules – length can vary, topics can vary, even content style or approach can vary.

Below, we’ve gathered a few of our favorite examples, including some longer and shorter variations, some fun and some serious variations, and more, to help inspire you and your team.

Entrepreneur and all-around business expert Gary Vaynerchuk (also known as Gary Vee) launched #AskGaryVee as a way to provide his viewers with as much useful information as possible. He releases two to three episodes per week and promotes it across his social platforms, his website, and even turned the show into a podcast, helping expand his audience and grow his brand. He’s got 304 episodes published (so far) each averaging about 40 minutes in length.

2. Humans of New York – The Series

Brandon Stanton launched Humans of New York as a photography project aimed at telling the stories of 10,000 New Yorkers. It grew so successful so quickly, it led to a book deal, insanely popular social pages, spinoffs, cross-country tours, and yes, a video series distributed on Facebook. HoNY is a masterclass as far as storytelling goes, and is a prime example of the power meaningful creative can have on a far-reaching audience.

This series is short and sweet – a three-part commercial totaling just one minute and 18 seconds, Farmers Insurance does a few things expertly here. They play with timing in a fun and creative way, they leave the audience hanging with head-scratching cliff hangers, and they actually tell a great fictional story that directly relates to the product they’re selling. It’s a win-win-win in our book.

How much difference can a change in budget make? Video software company Wistia tackles this topic head-on in their four-part original series that not only made it to Amazon Prime Video, but ended up winning a Webby award for Branded Entertainment Series in the Video category. They pushed a lot of money into testing three different video production budgets ($1,000, $10,000, and $100,000) and into their distribution and ads, as well, and ended up with a content series that amazed marketers everywhere.

Mailchimp has been creating some knock-out video content recently, starting with this original series that follows a stock photographer around, documenting her daily quirky experiences and her quest for a more fulfilling path. Each of the five episodes is just about seven minutes long, and provides a fun escape Mailchimp’s target audience (marketing managers and team members) can easily relate with.

Also check out their more documentary-style series Wi-Finders, which follows the stories of various people who have left office life to chase their dreams across different cities.

A real-life makeover series brought to us by Lowe’s Home Improvement, this series does an excellent job balancing product placement with practical home improvement tips. The series showcases easy ways to reinvent common home spaces with each episode covering a different area and remodeling it for viewers in less than 10 minutes. It provides useful information, it’s entertaining, and it’s a low-effort, high-reward commitment, the perfect equation for engaging content in a series format.

We know – thinking about creating even just one video can be stressful, let alone a whole series! But with the right strategy, a video series can be a great way to engage your users and keep them coming back to you again and again.

Don’t miss your opportunity – whether it’s long or short, fictional or documentary in nature, promotional or not promotional at all, a video series has immense staying power and can be just the thing you need to reinvigorate your audience.

home chevron_right The Growth of Episodic Content: Your Starter Guide