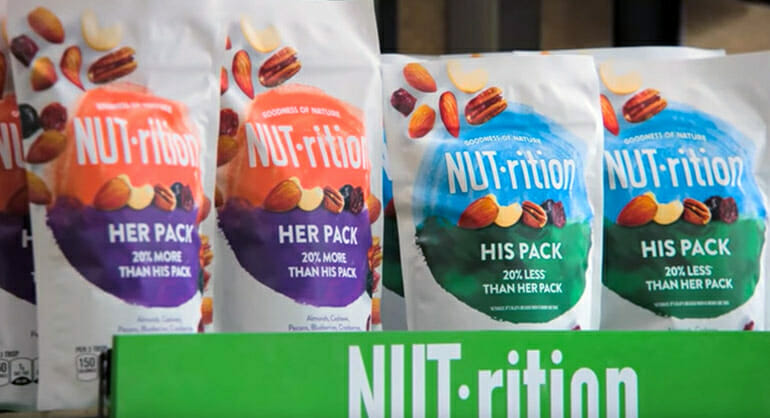 See How this Video Launched an Amazing Public Awareness Campaign

In the world of social media activism, it feels like any old Tweet can be just as politically motivating as an old-school public awareness campaign. But if you really want to fire up your marketing AND make a difference, partnering with a non-profit organization on a joint campaign is a lot more powerful than starting your own run-of-the-mill Twitter feud. And if you work for or own a company that wants to stand for something but still make money, a clever marketing video that brings awareness to an important issue can be the perfect move.

Take a minute and watch the video below, called “The Pay Gap is Nuts” from NUT-rition.

NUT-rition partnered with advocacy group Equal Rights Advocates under a banner advocating for “every woman to have the resources to demand more of what they’re owed.” They worked together to create this funny and thought-provoking video about the gender wage gap, which was executive produced by Laura Dern.

The hidden camera-style video is a time-honored tradition in both activism and viral videos. The format’s cheeky blend of reality and prank video is appealing because it features real people in an absurd situation where we’re in on the joke, but they aren’t – and we get to watch how it all plays out.

Now whether or not these are actually real people or paid actors, we may never know, but the reactions from the men who find out they aren’t allowed to buy the 20 percent bigger bag of nutritious nuts simply because they’re men feels genuine. It’s unjust, right? Which makes the larger point pretty apparent – it’s unfair to value people differently because of their gender.

Since no one is more triggered than sensitive bros hiding behind the internet, the haters came out in the YouTube comments of this video debating the very existence of a pay gap at all. The idea of anyone getting paid more for the same work should be a universally accepted injustice from most people in the workforce.

Instead, internet trolls decided to debate the entire validity of a pay gap instead of trying to empathize with women who experience it firsthand, ultimately highlighting the need for this type of advocacy campaign in the first place.

All pay-gap politics aside, the video was successful both in making a point and stirring up an emotional reaction. So what can you take away from this video for your own advocacy marketing initiatives?

1. Pick an idea that visually illustrates your point.

Whether it’s a physical bag that’s 20 percent bigger to illustrate the gender pay gap, or a giant dog to show the dangers of having a dog without a seat belt in a moving car, coming up with a clever visualization of your point helps bring that point to life. Whatever your main mission might be, try to find a visual way to show it.

Trying to show the impact of trash building up in the Pacific Ocean? Fill a bathtub with water, then add trash in it to scale with the amount building in the Pacific. I guarantee you’ll both gross out your viewers and make a point they won’t forget. Just remember to show how your product or service can help address the problem in a visual way, too.

2. Set your premise up from the beginning.

Like any other punchline, a good prank video is always set-up well from the start. In the “Pay Gap is Nuts” video above, the creators start out by explaining their premise, setting your expectations for what you’re about to see. You can of course do it the other way around, but when it comes to video, suspense is almost always more powerful than surprise.

In your own marketing videos, try to set your video’s premise up in the first few seconds. If you can capture your audience’s attention by asking a simple question that intrigues them, you can hook them into watching a longer video, even if it isn’t a funny prank-style video like the one above, but dealing with an equally important theme.

3. Nail the timing with great editing.

Whether you’re creating a hidden camera-style video using real people or actors, or any other type of marketing video, you’re going to have a lot of footage to sort through. Plus, getting the timing right on any marketing video that’s under two minutes is going to be a challenge – especially if you’re using footage from a real life event. That’s why working with a great editor or production team to handle the editing for you makes a big difference.

Consider all those great lines the “Pay Gap” video cut together. There was plenty of conversation left on the editing room floor, staged or not. Knowing what to take and what to leave is an acquired skill, so work with a professional or educate yourself by watching as many great videos as you can and apply what you’ve learned to your own video project.

If you’re looking to create your own mission-oriented marketing video, don’t do it alone. Look up organizations that work in the field on whatever subject you’re interested in and reach out to them to become an advocate partner for a potential joint video marketing campaign. Then, find the right video collaborators to help you set up, film, and edit your final piece of video content.