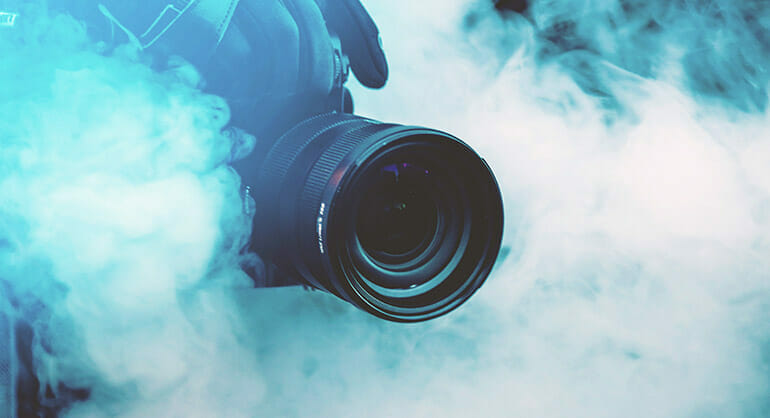 Even if you know nothing about videos or video production, you’ve probably had this feeling before: you leave a movie theater amazed with the visuals you saw, and you say something like, “That shot where they’re underwater and then the camera bursts out of the sea with him at the same time?! Amazing!”

Shots are an important part of any video, movie, or TV show, and refer to a specific camera angle that lasts for a specific amount of time. In video production, we talk about and plan what shots to capture anytime we go out to shoot anything – it’s part of the language of video and film. In order to speak that language, it’s important to know all the different kinds of shots and what they’re used for.

That’s exactly what we’re reviewing today, but first, let’s get a little bit more specific about what defines a shot.

What is a shot?

Shots are a shorthand term referring to a specific series of frames in a movie or video that lasts for a continuous duration, usually referred to by a specific camera angle or distance between the camera and the subject.

In order to capture a specific shot, you set the camera at a specific distance and begin filming a take, which is the length of time between when the camera starts filming and when it stops filming.

Film editors are responsible for going through all the different takes and picking the ones that will be used in the final film, which they then assemble together with the rest of their favorite takes to create a sequence. A shot ends when there is a cut, or edit, to another shot. Back in the day, that meant actually physically cutting strips of film. Now, they do it all digitally on a digital timeline.

What different kinds of shots are there?

As mentioned above, shots are usually broken down by a few variables: distance from the subject, also referred to as field size, or by camera angle, which refers to the placement of the camera in relation to the subject.

We also talked about the length of the camera lens above. The focal length of your camera lens can also impact the type of shot you’re taking. For example, a wide-angle shot features a shorter focal length camera lens, which creates a wider angle view, allowing you to take in more information in the frame than you would otherwise.

Shots can also be categorized by their purpose, as well. For example, there’s something known as the master shot, which refers to a shot that captures the whole action of a scene from a distance.

Still with us? Let’s break everything we just mentioned down a little further. With specific examples, you’ll get a better idea of exactly what we’re talking about.

Shots Based on Camera Distance

A shot taken from a distance using a wide focal length lens.
When to use it: When you’re showing the scope of the world or environment around a character.

A shot that captures a subject’s full appearance.
When to use it: When you want to show a character’s full attire and range of movements, like entering or leaving a scene, or standing off against an enemy.

A shot that captures a subject from the waist up.
When to use it: When in mid-conversation.

A shot that’s close on a particular subject, usually a person’s face.
When to use it: When attempting to convey a specific and important emotion or feeling.

A long shot from a particularly far distance with a long focal lens.
When to use it: When making a subject look small in comparison to the world around them.

Shots Based on Camera Angle

A shot that’s straight down on a particular subject.
When to use it: When conveying a sense of inferiority, or a feeling that something is amiss, while taking in the larger scope of the world.

A shot where the camera is below the subject, looking up at them.
When to use it: When conveying a subject as powerful or foreboding to another subject.

Where the camera is above the subject, looking down on them.
When to use it: When conveying a subject as inferior or weak compared to another subject.

A shot where the camera is diagonal or off balance in some way.
When to use it: When conveying something very off is happening to a character.

A shot over the shoulder of one subject looking at another.
When to use it: When two characters are talking to each other or facing off in some way.

Shots Based on Specific Purpose

A shot that establishes a location, usually from a wide angle to take in the entire location.
When to use it: When cutting to a new scene and/or introducing a new location.

A shot from a distance that covers the entire action of a scene.
When to use it: When establishing a scene where all the shots that follow relate in some way.

A medium shot with two (or more) subjects in it.
When to use it: When two or more characters are on the same side, facing off against another (or group of others).

A shot from above, usually taken from a helicopter or drone.
When to use it: When conveying scope while sweeping over a location.

A shot where the camera moves toward or away from a subject.
When to use it: When emphasizing a key action a character is taking.

A shot where the camera follows a subject along a set track.
When to use it: When following a key action or series of actions.

That’s OK! There are a lot of different types of shots, but they’re all pretty straight forward once you get the hang of them. Luckily, to keep it simple, most shots are named after the way they look.

Next time you’re watching an amazing movie and can’t quite grasp what made the visuals so mesmerizing, you’ll have a better idea what it is. Or, even better, if you’re looking to make your own brand video, you – or the team you’re working with – can incorporate some of these creative angles to help make your video more engaging and more captivating.