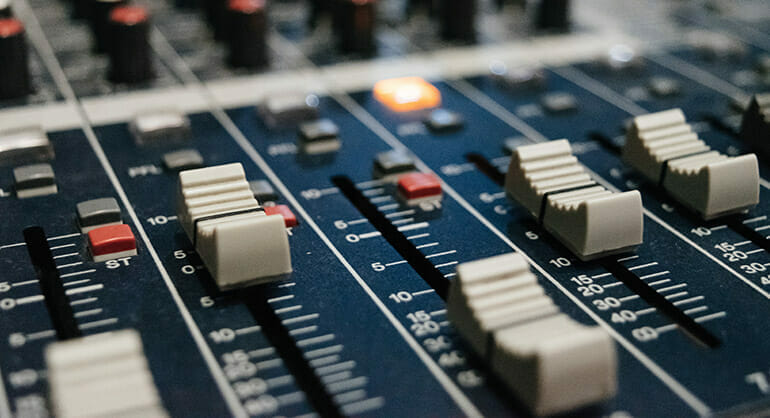 When it comes to the elements that make a great video, whether it’s a five-second pre-roll ad or an Oscar-winning motion picture, one thing you cannot overlook is audio.

Audio is a critical element that can make or break the best of videos. Nothing is worse than watching an indie short film or coming across an appealing video on YouTube with a beautiful opening shot and fantastic musical score, only to have the actors come on screen and deliver crinkly, way-too-loud or way-too-quiet dialogue that sounds like it was recorded in a box under the ocean.

A lot of this comes down to post-production sound editing and sound mixing – two technical categories so important, they have their own Academy Award categories. But even if you have all the money in the world to spend on sound editing, it saves so much time and money to get your sound right the first time by recording quality audio on the set during the production stage of your video.

That’s why we’re reviewing the top tips and tricks you can use (and can’t overlook) to ensure you capture great-sounding audio while filming on production day.

But first, a few basics.

How do you know if you need sound?

While not every video type requires you to record audio on set, like lifestyle or music videos that’ll be scored with a backing soundtrack, any scene that features dialogue, or someone talking, will require some type of audio to be recorded on set.

Some types of videos that could require on-set audio recording include any interview, event, or other docu-style videos, any tips and tricks, educational, or how-to videos with a spokesperson explaining something directly to the camera (how-to videos without a spokesman can be recorded with ADR later), or any narrative videos, like commercials, brand videos, or promo or product videos that have speaking roles.

How do you capture audio on set?

After determining whether or not the type of video you’re creating will require audio recording or not, you’ll need to decide how you’re going to record it. If you plan on capturing any audio on set, rule number one is don’t use the camera’s onboard microphone.

Instead, plan to use a separate audio recording device, also known as a sound recorder.

Once you have a sound recorder, you’ll still need to connect that recorder to a mic, unless you use something like the H2n Handy Recorder, which has a mic built in. These mics will either be attached to the person speaking, or captured using a boom pole, which is a long extendable arm with a mic attached to it.

The boom is used to direct the microphone so you can pick up sound from whatever direction it’s coming from. If your camera is farther away from your subject but you want to get sound closer up, you can sneak your boom pole up close to your subject to capture their audio – as long as you keep the boom pole out of the shot!

On the subject of mics, let’s dive into tips to help you get your audio right from the start.

Or hire a production sound mixer who does.

Depending on what type of scene you’re filming, or where you’re positioned when you’re filming, you may need a different type of mic to capture sound accurately. If you don’t know what you’re doing, your first option is to hire an on-location sound mixer to capture your audio for you.

By hiring an informed sound mixer, they’ll be able to pick the perfect mic for whatever situation you find yourself in.

However, if you can’t afford a sound mixer or want to learn how to do it yourself, here’s a basic overview of what type of mics there are and when you might need one.

Shotgun Mic
Long skinny mics attached to a boom pole, these mics are versatile and great for capturing sounds in controlled environments, but tend to pick up all kinds of sounds, and aren’t as useful in really loud locations.

Lav Mics
Abbreviated from lavalier mics, these microphones are wired and attached to a battery pack, both of which are attached to the person speaking. These mics offer the best direct pick-up of an individual’s lines, but you’ll need one for every character or spokesperson with a speaking role.

Handheld Mics
These microphones are useful if you’re doing on-the-go style interviews, but are usually only good for picking up the immediate audio of whoever is holding the mic directly to their face, and isn’t good for creating a dynamic sounding video, so use sparingly or in addition to a shotgun mic.

On-Camera Mics
This refers to any mic that can be plugged into the camera you’re using to pick up sound. You don’t want to use these for your actual soundtrack, but they are good to use to capture a scratch-audio track that your editor can use in the post-production stage to sync up your video and audio.

When you scout a location, especially for a scene where there will be speaking roles, you’ll want to consider what recording sound will be like at that location. For example, if the location is outdoors, how windy is it? Is there rushing water or a busy intersection nearby? If it’s indoors, will there be other people nearby? Will you be filming on-location at one of your company’s actual restaurants during work hours?

Just because a location may be tricky for audio, doesn’t mean it’s impossible. In fact, the more you consider sound ahead of time, the easier it is to prevent problems, or at least prepare for them. Even just giving a hired Sound Mixer a heads-up about any sound issues there may be at the location is a step in the right direction.

For windy locations in particular, you can bring gear to help protect your microphones from unwanted wind sound. These include:

3. Consider the camera’s sound point of view when recording.

Is your subject close to the camera, or far away? If your subject is far away from the camera, and it’s an important part of the story or part of a joke, you should record the audio with your boom pole far away, too. This way, the sound you capture sounds like it’s at a distance. This might seem like something that’s easy to change in the editing stage of a video, but it’s always easier to get it right on set – just make sure you or your mixer can still hear the audio clearly.

4. Capture “wild sound” while on set.

Speaking of things to help your editor in the post-production stage, capturing 60 seconds of room tone, or “wild sound” on set can be a huge benefit. This is background sound of a location that can help cover any awkward pauses or missing sound in the editing process, and make your video’s soundtrack sound smooth as you cut from shot to shot.

It’s important that you capture this ambient sound while everyone is present – actors included. That way it sounds as similar as possible to the sound you record in between and during spoken lines.

5. Make sure all your actor’s lines are clean.

By clean, we mean without any background sounds or other actors talking over them. If one thing is incredibly difficult about editing sound, it’s removing stray sounds that show up in the background of an actor’s line, which includes an overlapping line from another actor.

To make sure you get “clean” versions of every line, check in with your sound mixer (who will be watching this, as well) to make sure you got it without any airplanes, weird hums, or clipping from another line, or capture wild lines at the end of the shoot so that you always have a safe version of the line for the editor to use in case of a stray background sound issue.

Also, if you have a scene where your two actors are talking over each other, make sure you do a take where the two actors pause for each other to finish their whole line. It will feel a little unnatural, but it’s worth getting to be safe.

Luckily, you don’t have to capture every sound in your video while you’re on set. In fact, usually you only capture the speaking lines of your dialogue and any ambient room tone, then add any special sound effects after the fact. That isn’t a sign of failure – it’s a massive time saver.

Special sound effects like metal clanging, doors closing, or animal sounds can be found easily through online sound effects databases, or you can record specific sounds through a process called foley, where a sound engineer will record the sound effect specifically to match your scene.

This is a little more expensive, but you can always create your own indie foley stage by setting up a microphone in as close to a soundproof room as possible, and record it yourself. It might take a few tries to get right, but it definitely can be fun.

Need some video to go with that sound?

If you’re not planning on doing it all yourself, and would rather leave it to the professionals, we’d love to chat! Reach out to schedule a call today with one of our creative producers to discover how we can take your video goals to the next level.