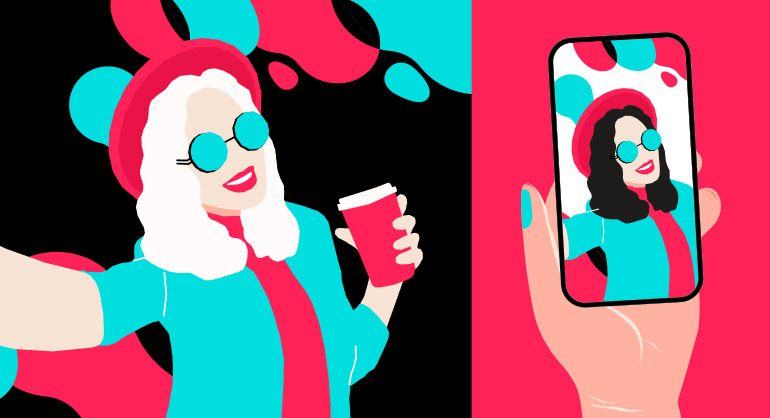 Whether you’re a fan of TikTok or not, there’s no denying the way the app has exploded in popularity and spilled into pop culture. And if you’ve spent any time on the app, you’ve probably noticed that content on TikTok tends to have a distinctive style.

Those trends may seem to be confined to the app itself, but they may soon make their way into the production world long-term. After all, this wouldn’t be the first time a social video app made a lasting impression on the video space. Case in point: Vine.

Vine, you may recall, was a short-form video app (similar to TikTok) that had its time in the spotlight from 2012-2016. On Vine, videos were six seconds long—a hyper-short timeframe that somehow managed to offer seemingly limitless opportunities for content creators.

Vine shut down years ago, but its impact can still be felt today. Sometime around the rise of Vine, hyper-short, six-second videos started popping up everywhere. Today, many ad platforms offer six-second options, and marketers have had to learn to keep up by tightening up their storytelling to fit within the six-second limit.

So, while TikTok is still very much enjoying its time in the spotlight, it’s likely that the platform is already beginning to leave its legacy on the video space. That being said, here are five TikTok-inspired trends that we think have the power to shape the future of video and production.

While TikTok videos aren’t confined to six seconds like Vine, the app is still built for short-form content. Individual videos on TikTok can be up to fifteen seconds long, and they can be strung together for a total of up to sixty seconds of content in one individual post.

Short-form content is already popular in the production world for many reasons, including consumers’ decreasing attention spans and lower tolerance for ad-heavy content. TikTok will likely perpetuate this shift, as Vine did, by proving the value in short-form content.

TikTok makes it clear that short-form content is powerful. When used correctly, it has the ability to entertain, to elicit emotion, to tell a story, and to convey complex information even within a confined timeframe.

Showing what’s possible in a span of 60 seconds or less also raises the bar for branded video content. If a TikTok post is enjoyable or clever enough to garner millions of views from content-hungry users, brands should be able to accomplish similar feats with their own content.

If you’ve never watched a TikTok video, you might be surprised at how fast-paced the content feels. This has to do with more than just the short timeframe; TikTok content creators often quickly jump from one clip to the next, using transitions or on-screen text to help string the clips together cohesively.

Many of these clip changes also play with the passage of time (like this video). In videos that use this approach, viewers see clips strung together in real-time, while the person filming went through a much more strenuous process behind-the-scenes, setting up the clips to look like they flowed naturally.

The result for the future of production? Growing demand for fast-paced, attention-grabbing content.

On Tiktok, on-screen text is crucial. In many videos, there is no dialogue at all. The sound will instead be added during editing in the form of a popular audio clip or a snippet of a song. The replacement for dialogue, taking on the burden of carrying the story, is often on-screen text.

Many TikTok creators will stand in the middle of their screens while filming, pointing to different spots around them where they’ll add on-screen text later while they edit. The final product (after the on-screen text is dropped in during editing) shows the person pointing to different text boxes as they pop onto the screen, eliminating the need for any voiceover explanation. (See what that looks like here.)

In the production world today, on-screen text is sometimes seen as more of an afterthought. It’s often either the direct captioning of the video’s audio, or it’s used to call out important points made in the voiceover.

While the last several years of digital consumption have emphasized the need for videos to make sense without audio (as many platforms auto-mute content), many videos still feature a voiceover for those who do choose to play content with sound enabled.

On TikTok, this concept is flipped on its head. The on-screen text is the storytelling, and enabling audio just adds background music to enhance the overall experience. Expect to see more of this emphasis on on-screen text carrying a narrative in the coming months and years.

4. Emphasizing the role of sound.

Despite the use of on-screen text, sound is incredibly important on TikTok. While videos that emphasize on-screen text may use sound as a final enhancement, many other types of videos rely almost entirely on the audio clip overlay.

One popular type of TikTok video involves lip-syncing to someone else’s audio, making it especially important that viewers can hear the dialogue. With the sound off, the videos won’t make any sense at all. It’s for this reason that many articles written for TikTok newbies emphasize the need to engage with the app with the volume turned on. The experience is completely different with sound muted.

Another trend is for certain types of videos (often TikTok challenges) to be set to a specific song or beat. For these videos, you can often anticipate what you’re about to see just by hearing a second or two of the audio. Again, the sound is important, even though here it doesn’t necessarily add anything specific to the interpretation of the concept. For these videos, rather than carrying the story, the sound unifies videos that follow the same trend, identifying them as part of a larger TikTok concept.

5. Allowing everyone to express themselves through video.

Finally, TikTok is a great way to convince skeptics that video production is for everyone. There are two key takeaways here.

The first takeaway is that many TikTok users are learning the basics of what makes a great video just by engaging with the app. People who spend significant amounts of time creating TikTok videos are learning how to enhance the quality of their clips, how to think creatively about the production process, how to come up with interesting ideas, and how to add a creative flair during the editing process.

These are skills that will come in handy in the coming years as video production skills become more essential for a variety of career paths—and even just for everyday life.

A second takeaway is that more people are learning that they have what it takes to make great content. What might have previously been seen as an industry plagued by gatekeeping is now being embraced by everyone—all ages, all skill levels, and all perspectives.

What does this mean for consumers? It likely means we’ll see a greater diversity of content, and more people will see themselves represented by the clips they come across online. As more people get involved in the creation process, more of the viewing population will feel like they can relate to what they see online. We can’t wait to see where that takes us!