What’s a Director and Does Your Video Really Need One?

“Cut!!” Are you seriously asking what directors do? Isn’t it obvious? Directors direct, of course! Haven’t you seen a pretentious-looking bearded guy in a baseball cap sitting in a high chair in front of an HD TV yelling, “Action!” into a megaphone before?

When you hear the word director, you often think of some Hollywood big shot, like Steven Spielberg, Martin Scorsese, or J.J. Abrams. But outside of the stereotypical megalomania, directors have a very specific job, and it’s not exclusive to the sets of those big-budget, high-celebrity Hollywood movies. Even low-budget marketing videos need to have a director role in order to function properly.

But what does a director on the set of a marketing video actually do? Does your video really need to have a director? How do you direct? What skills does directing require?

We’ve got all those answers, so let’s dive in!

A director is the person responsible for curating the creative vision of a project. While that sounds more “cinema-as-high-art” and less “content-to-increase-revenue,” it’s a role just as crucial in any short, five-second ad as it is in a $200 million dollar Marvel movie.

To break it down, directors are the ones responsible for dictating the look and feel of a movie or video. They tell other people what to do in order to make the movie they see in their head, which is where the concept of the auteur director came from. An auteur director sees the director as the singular “author” of the movie. It’s why we give so much credit to directors like Wes Anderson or Quentin Tarantino for their unique visions, instead of the thousands of other people who worked on the movie alongside them.

In actuality, the director does a lot of work communicating their vision, and the resulting clarity of that vision – that feeling that a video is what it’s trying to be – determines how successful the director was in their communication.

What do you need to know to direct?

Let’s start with what you think – what does a director need to know?

If you guessed any of the above, you’re wrong.

So what does the director actually need to know?

That’s it! That is all a director actually needs to know how to do. Now, obviously the job of the director is much more involved than just those two things, and most good directors have a good eye for the camera, have pretty good editing instincts, and know a thing or two about costume design from years of working with costume designers. But none of those things are requirements to actually do the job of directing.

To direct, you just need to have a clear idea of what you want to see and be able to effectively communicate that to your team. If you don’t have either of those two things locked down, I hate to break it to you, but you won’t be a good director.

What does a director do on the set of a marketing video?

For starters, have a vision and be able to communicate it to their crew in the same way any big Hollywood director would. This requires taking certain actions throughout the pre-production, production, and post-production stages, which we’ll dig into below. But know this: the planning of the vision, and the communicating of the vision, is all they really need to do.

Now, some sets will ask the director to do more than just sit in their fancy chair behind a monitor and belt out directions. In actuality, on a larger production set, there is someone called a first assistant director, or 1st AD, who takes care of the specifics of actually running the set so the director doesn’t have to worry about logistics like where to send the intern to pick up lunch.

But when you’re shooting your own marketing video, for example, some of those production management responsibilities may fall on the director. If you’re directing, they may fall to you. That’s where it’s good to have a production team, or at least someone to act as a producer, who can accommodate for things like when to buy lunch for the crew and who’ll pay for it.

Let’s get into the specifics of what a director does at each stage of a production. 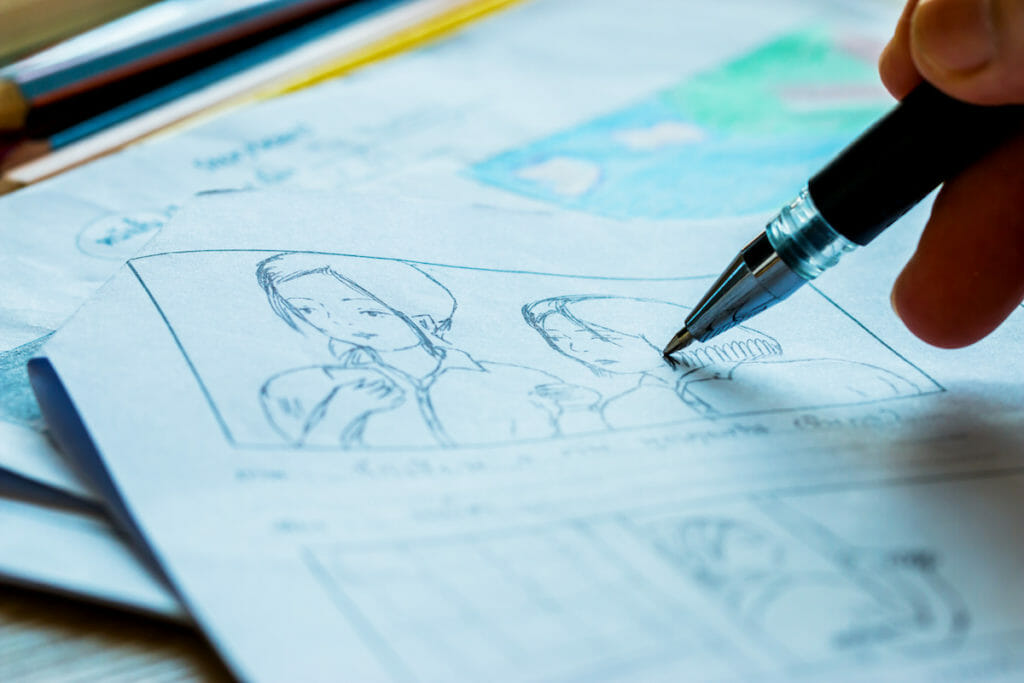 Before a director ever gets on any set, they’ve gone through the pre-production stage. This stage can be the most laborious for directors because of all the planning required.

Here’s a few things a director may want to do to prepare for a shoot:

Write out a pitch.

Not all directors write their own material, but if you’re directing your own project, it will often start with you writing your own pitch. This can look like a few different things. Either a script, which is the dialogue and story points for a narrative short; a treatment or beat sheet, which are just outlines of the story you want to shoot; or a pitch deck, which includes thematic visual aides to help visualize the look and feel of the video you want to create.

Once you’ve got the underlying story mapped out, you’ll want to create a visual guide for how you’re going to film it. This can look like a storyboard, where you physically draw the shots you plan to shoot for your video, or a shot list, which is a written-out description of each shot you plan to film. In most cases, creating both is a must.

Need your very own storyboard template? Download ours by clicking here!

Once you have the look and plan for how you want to shoot your video locked down, you’ll want to work with your production team to secure any locations and plan out your shoot day. This requires you to know the logistics of your locations, and schedule out when and how you’re going to film everything. This can and should be as specific as possible, but remember that on film shoots, anything that can go wrong will. A little improvisation will usually be required.

If you don’t have a film crew on your team, you’ll need to hire your production crew. For example, you’ll need to hire a videographer to work the camera, a sound mixer and operator to record any on-set sound, and if you’re working with lights, you’ll need a one- to three-person lighting team to work with your videographer and make lighting run as smoothly as possible. You may need more crew to assist as a camera team, but most marketing videos you shoot yourself can be done with a single videographer.  Lastly, you’ll need to cast any talent, (aka actors,) for any speaking roles or product modeling.

Once all this is done, and you’ve got purchased or rented all the equipment and gear necessary for your shoot, you should now be ready to head to set! 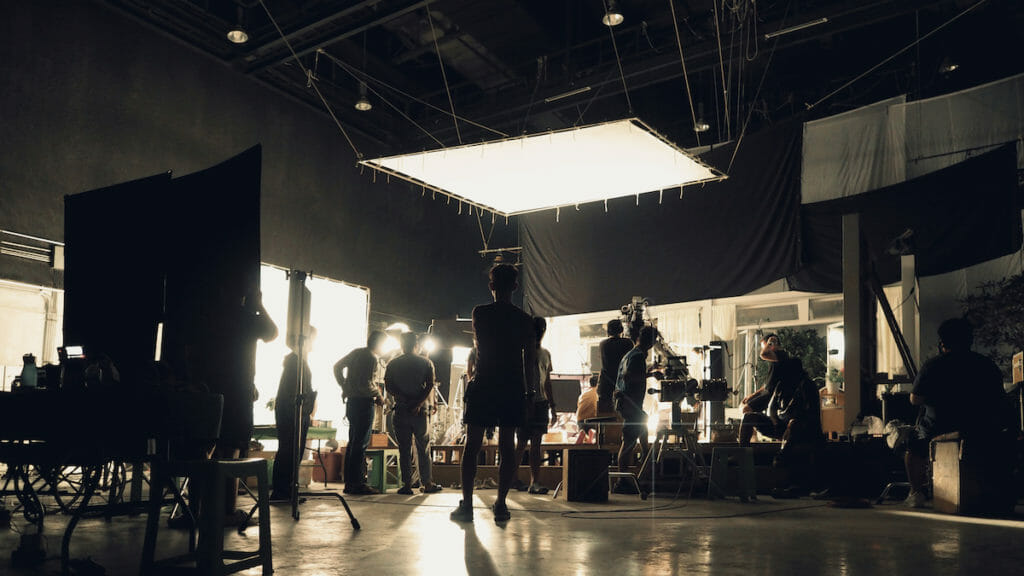 This is your moment! Production is the day that every director dreams about, when you’re actually on location, on the day, making the magic happen. Your job on set now will depend on how well you prepared during pre-production.

For example, if you wrote your own treatment and storyboarded all of the shots, now you just need to follow the schedule you created and communicate what you want to capture to the rest of your team.

There is one very specific job the director has in addition to communicating their vision: calling “Action!” If you have a 1st AD on set with you, that person will handle getting everyone ready, quiet, and synced up between camera and sound. If not, you will. Then, finally, the director calls “Action!” to begin the scene, and “Cut!” to end it. If you need to give notes to actors or your camera team, you do it between takes, which is what you call each time you roll the camera to record. Rinse and repeat!

If all goes well and everyone knows what you want them to do, then the day should go smoothly – or as smoothly as possible (Murphy’s Law, and all that).

The best way to look at pre-production in relation to production is this: the more you plan ahead, the more you can play on the day. Mitigate as much risk as you can by planning ahead! 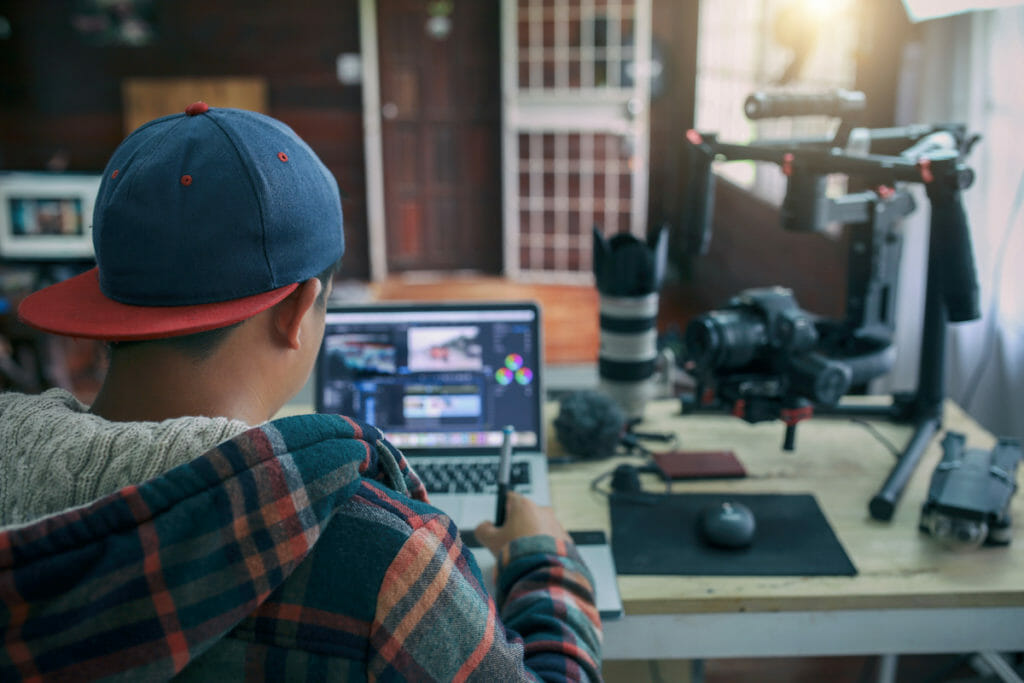 The hardest part about being a director is how time-intensive the job is. For example, most directors are on a project from the very beginning to the very end. That’s why the director’s job is not over after production wraps.

Once in the post-production stage, the director has the choice to hand over the editing to an editor or to try their hand at editing themselves. It’s almost always recommended to work with an editor, because even if you have an editor working on cutting together your video, you’ll still work closely with them as a director, providing feedback on multiple rounds of edits.

In this stage, communication is key. If the timing on something is wrong, or you want another shot to be used instead of the one the editor chose, now is the time to say so. Once the picture is cut together, you repeat the process with the sound edit, and then work with your camera operator to do a color correction to edit the visuals and make sure all the shots look well together color-wise.

Then, and only then, when the director makes the final call, is the video finally done.

Looking to direct your own marketing videos?

Go for it! You’ll need a video team to back you up, but even if you’re operating the camera yourself, there’s no reason you can’t plan and direct your own marketing videos. Every YouTube star with a camera in their bedroom is technically a director, so it can be done. (Though we do recommend working with a production team to help you along the way!)

home chevron_right What’s a Director and Does Your Video Really Need One?