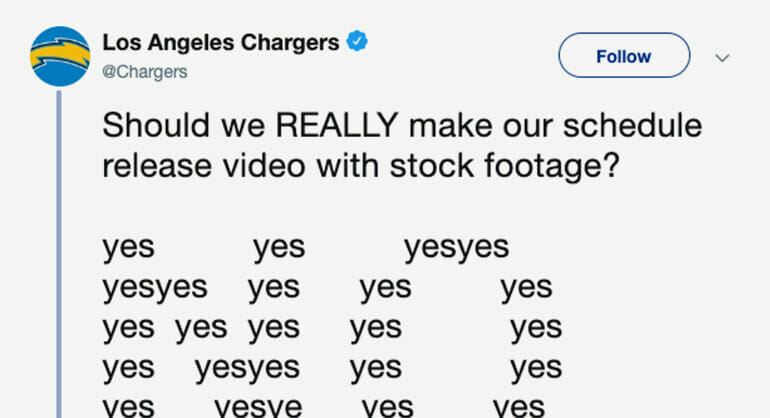 Viral Video: How the LA Chargers Killed It on Twitter

Stock footage sometimes gets a bad rap for being cheesy, fake, or just plain bad. But when used correctly, stock footage can be a lifesaver (or a screensaver) that helps you get across an idea visually without having to go out and shoot it yourself.

If you’re trying to show how climate change affects our planet, it might get pretty expensive to take a helicopter through the polar ice caps, but lucky for you, plenty of nature documentarians have already done that and that footage is readily available to you. Thanks, National Geographic!

And there are plenty of creative and useful ways to incorporate stock footage without a single viewer ever realizing its fake. When added to footage you capture yourself, it can blend seamlessly into a lifestyle video, or be used as b-roll alongside interviews for an educational or industry video.

Leaning into the creative side, you can also make a video entirely from stock footage, like the Los Angeles Chargers did for their latest schedule release video.

Instead of using the typical b-roll footage of former NFL match-ups between themselves and the other teams in question (largely because, as the newest team in the league, they don’t have much of said b-roll footage), the Chargers chose to represent their week-to-week pairings by using more symbolic representation.

The idea was to be as silly as possible, so the footage they used is pretty goofy. So goofy, they didn’t even bother to pay to get the watermarks removed – unless that was a creative choice to really bring home the point? I can believe either.

Take a look yourself and enjoy the laughs:

Should we REALLY make our schedule release video with stock footage?

What can we learn from this (besides Chiefs = Chefs forever now)?

1. There’s stock footage for everything.

And we mean everything. It makes sense – access to high-powered cameras and digital databases of footage are easier than ever to get ahold of. Shutterstock has an archive of about 83,000 clips actually labeled “bad stock footage” alone. Yes, that’s how they label it. We’re not joking.

Now more than ever, you can find everything from kid chefs to bulldogs dressed as lions, and so much more. So why not open yourself up to using more stock footage (when appropriate) in your own video marketing? It can save you time and money spent on expensive and time-consuming on-location shoots, fill gaps in b-roll footage, or help expand the visual world of a video with cool overhead drone shots. What’s not to love?

2. A good editor is (sometimes) all you need to make a good video.

The timing, pacing, and fun zoom-ins make this video a goofy and wonderful social media win, and since we know the LA Chargers didn’t actually go out and film any of this footage themselves, everything just mentioned comes down to one element: good editing.

You can shoot the most amazing footage on Earth, but if your editor can’t string the visuals together in a compelling manner, you’ll never have a good video. Good editing makes or breaks plenty of films and television shows, and marketing videos are no exception. You can make up for lower production values with a compelling edit any day.

If only there was a video company with awesome video editors ready to edit fantastic videos for you, available to hire at the first ring of a phone call…

3. You don’t always have to do things the traditional way.

While stock footage can open your video marketing up to all kinds of new on-screen possibilities, this video is a good reminder that doing things the traditional way isn’t always the best way to stand out. In fact, the opposite is true.

By having fun with their schedule release video, the Chargers stood out and got a lot of people talking about them. Plus, their video has a call to action to buy tickets at the end, making the end goal to sell more tickets all the more effective. By getting friends and foes alike to share the video, they used word of mouth to get their video millions of views, and we’d be mighty surprised if that didn’t lead to thousands of ticket sales.

From making it all the way to the AFC semi-finals last year to this latest social media masterpiece, the Chargers are the team to beat this season. Don’t like it? Too bad!

(We don’t actually know that much about football, but we love funny videos. Did we just become Chargers fans? Yes, yes we did.)

home chevron_right Viral Video: How the LA Chargers Killed It on Twitter