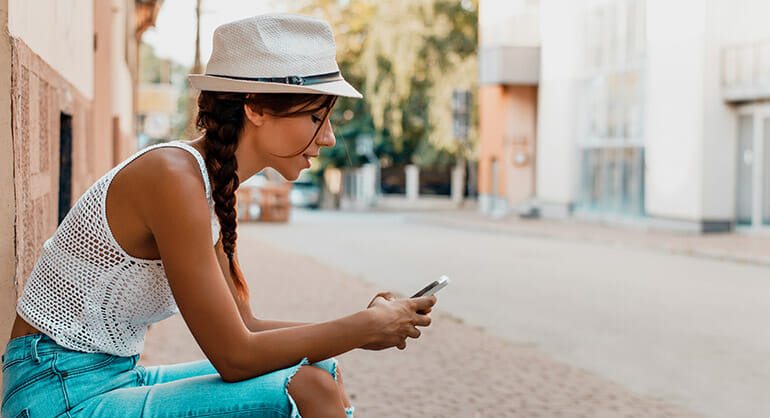 It’s time for the next installment of our “Video Trends in 2020” series (check out parts one and two!), and this time, we’re looking at vertical video. All over the Internet, there are complaints from users watching vertical videos saying things like, “Why wasn’t this filmed horizontally?!”

To put it simply, vertical video has a bad reputation. But it shouldn’t. In 2020, we’re anticipating that uses of vertical video will continue to expand as more content creators and viewers embrace it.

What is Vertical Video?

Vertical video content uses a 9:16 aspect ratio. It’s formatted to take over the full vertical screen on a smartphone. Instagram stories, IGTV, and Snapchat are examples of vertical content types. Sometimes vertical content can be flipped for a smartphone that is held horizontally, while other times, the orientation is locked. Many apps control this flexibility themselves, choosing whether or not it will be possible to swap orientations on the interface.

Vertical video has been traditionally ignored in favor of horizontal video. This is due in large part to the fact that horizontal video aligns with the way our eyes process visual information. Imagine watching a full movie in a vertical view. It doesn’t sound very enticing, right? That’s because our eyes are oriented horizontally on our faces, and the world that we interact with is largely horizontal.

Additionally, if you view a vertical video on a horizontal screen, you’re left with the dilemma of how to fill the empty space. Some content creators settle for the black boxes that take up the background, while others project a duller version of the same video content on the sides. In either case, it’s clear that the vertical video content was not intended to be viewed horizontally.

When Should You Use Vertical Video?

So, why are we talking about this? Despite vertical video’s downfalls, it definitely has a place in the digital spaces we interact with. The challenge is that our smartphones are oriented vertically, and most people hold their phones upright—even when viewing video content.

What’s more, even in cases when the video will auto-adjust for horizontal viewing, the fact that we can tilt our phone screens to create a better experience doesn’t mean that we will. Many people are lazy in their digital content consumption, and the extra effort that it takes to use two hands to hold the phone sideways isn’t worth it.

So, while vertical video has been ridiculed by everyone from filmmakers to marketers, many people are seeing the error of their ways in shunning the entire art form.

From an engagement perspective, there have been a number of interesting studies that found merit in using vertical video. Breadnbeyond, for example, found that smartphone users hold their phones vertically about 94% of the time. Why create content exclusively for the other 6%, rather than capitalizing on the 94% that’s readily available?

MediaBrix, a mobile-first video ad platform that is now owned by Verve, did extensive research on this subject. The company found that more than 90% of iOS apps in 2016 had a fixed vertical orientation (i.e., it’s impossible to flip to a horizontal view). It also found that engagement differed between vertical and horizontal adds; vertical video ads were completed 90% of the time, while horizontal ones were only watched until the end 14% of the time.

Finally, Snapchat, which helped shape the vertical video consumption habits with users on its app, encouraged advertisers back in 2015 to take the leap in creating vertical ads for the platform. It shared that its best-performing shows and ads were vertically-oriented and that vertical ads were viewed to the end nine times more often than horizontal ones.

At the time, Snapchat faced pushback from advertisers who didn’t know how to shoot vertically, and many companies were hesitant to create content that couldn’t be distributed elsewhere. Today, the conversation has shifted, and vertical content on the app is flourishing.

What’s more, we’re also seeing research that highlights the importance of mobile devices in purchasing decisions. One study found that a full third of people now make purchasing decisions exclusively on mobile, making these smartphone touchpoints even more critical for businesses to excel at. Part of excelling in 2020 will mean embracing vertical video, so the importance of this vertical vs. horizontal conversation becomes even clearer when you acknowledge the way it affects sales.

So, what’s the key takeaway here? Vertical video isn’t going anywhere, and companies that are stuck in an “all video should be horizontal, no matter what” mindset are going to get left behind in 2020.

This shift isn’t temporary, either; we likely won’t have horizontally-oriented phones anytime soon, but we’re not going to start watching movies vertically just for the sake of unity. The challenge for 2020 (and beyond) will be finding a way for the two content forms to coexist, and the first step is embracing vertical video as a legitimate option.

So, next time you’re tempted to flip your phone to record a video, resist the urge, and see what happens if you don’t. The change may even spark new ideas and lead to more creative content!