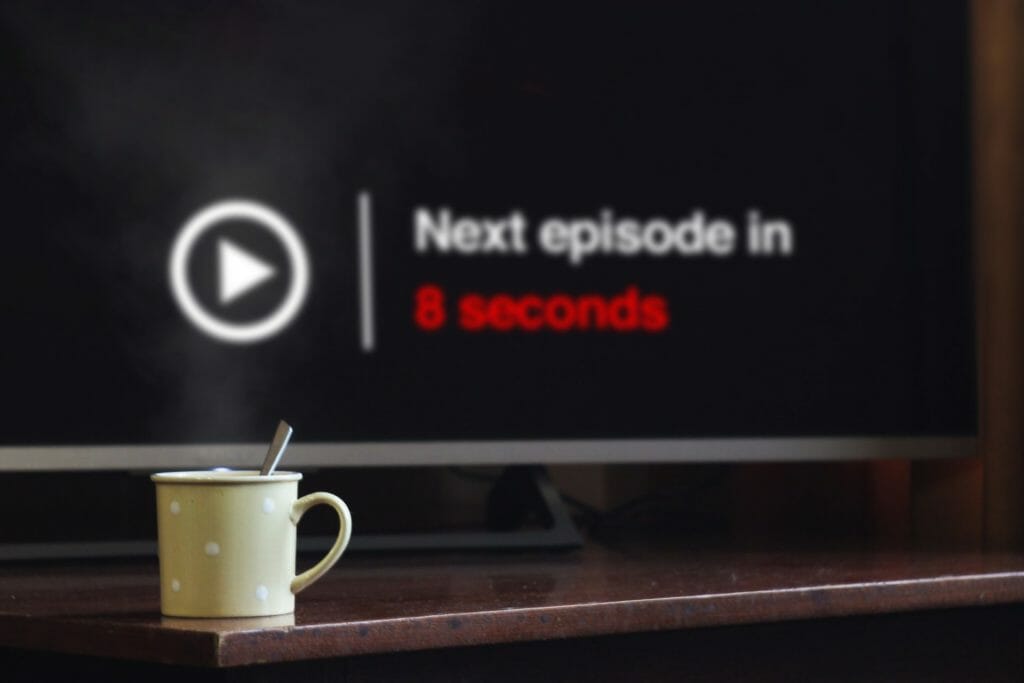 Binge (/binj/)
noun
“a short period devoted to indulging in an activity to excess.”

While in theory, the idea of binging has many negative connotations, in this day and age there is no better compliment for a piece of content than referring to it as “binge-worthy.” Binge-watching has rapidly become the standard method for viewers around the world to ingest their favorite content – from film to television to branded video. Already, 60% of viewers report that they have watched two or more episodes of a show in a row at some point during their week, while 45% of young adults have actually canceled social plans in order to stay home and binge. As outrageous as it may sound to non-believers, bingeing is the new normal.

If you can try to understand the psychology of what makes certain content bingeable, and why, then you too will be able to create videos that keep your audience coming back. But why did viewers develop such an extraordinary capacity for content consumption in the first place, and how will their tastes continue to evolve going forward?

The Birth of Binge

The rise of binge-watching cannot be separated from the rise of Netflix. While Netflix was not the first on-demand streaming company, it is certainly the most important, and helped reshape the content landscape forever. During the 90s, Netflix originated as a service that rented movies and television shows to customers through the mail. But in 2007, as Netflix shipped out their one billionth DVD, they also launched an on-demand streaming service that would quickly become the focal point of their business model.

Several years later, the true dawn of the modern binge-watching era would arguably arrive when Netflix first released full seasons of critically-acclaimed shows Breaking Bad, The Walking Dead, and Mad Men, along with original prestige dramas like House of Cards and Orange is the New Black. These shows featured complex narratives that may have been too slow for audiences when watched one episode at a time–for instance, Breaking Bad was on the verge of being cancelled by AMC due to low viewership–but which came alive when viewed in a row, like one long movie.

At the same time, traditional media outlets like movie theaters and broadcast/cable television began bleeding viewership. Every year, millions more Americans are “cutting the cord” in favor of exclusively consuming their media via desktop and mobile. The thinking behind this doesn’t need a master psychologist to untangle. Why pay more, these people ask, for a comparatively restricted experience when for a much smaller fee you can access borderline infinite content from the comfort of your own home?

Together, these factors and more contributed to the rise of a binge-heavy culture where viewers (especially young viewers) prefer to engage with all their favorite content on-demand in lengthy, comprehensive chunks. This has in turn created a feedback loop of new content being created specifically for the “binge format,” which encourages more binge-watching, which encourages more bingeable content, etc. But knowing all that, how can you optimize your brand’s video marketing content for binge-watching?

For your video content to be described as “binge-worthy,” it needs to be not just compelling, but outright addictive. Luckily, there are multiple creative and conceptual principles your brand can adhere to in order to help achieve this goal – some obvious, others less so.

The most important thing for creating binge-worthy content is always going to be quality. At the end of the day, bad video is still bad video. Nobody wants that. And of course, “quality” is inherently subjective. But by making sure that your team doesn’t skimp on production essentials (color, casting, etc.) from the start, you can free yourself to focus on more creative, audience-based concerns that relate to bingeablity.

Next, let’s think about the story you want to tell. When you set out to create binge-worthy video content, consider what your audience already enjoys and why. While wanting to create an epic Game of Thrones-style series is a great idea in theory, if your brand’s specific audience typically reacts well to goofy comedy, focus on something more stylistically-similar to that instead. These videos are meant to be a continuation of your existing video strategy – a way to reinforce it, not undermine it.

The Zeigarnik effect is a psychological phenomenon where the human brain remembers tasks or events that have been interrupted more easily than those that have been completed. Put in layman’s terms, we need to know how something ends – which is why cliffhangers are such a powerful tool for generating content engagement.

By structuring each video that you release around a cliffhanger ending, you will encourage your audience to click through to the next piece of content…and then click through again, and again, and again. Alternately, you can end each video with a tease about what will happen in the next installment. This technique is especially useful for educational video content, where it can feel even more intuitive to unspool interconnected lessons between videos, i.e. “Now that you’ve learned about crafting the perfect marketing email, join us next episode as we show you how to generate mass email lists.”

To quote content marketing expert Sean Schroeder, “The ideal content experience is one that adapts as customers become more mature in their understanding of the problem they’re looking to solve.” What that means is your video content rollout should be structured in such a way that it accelerates and grows alongside your audience. If your first lessons are for beginners, gradually guide viewers towards expert-level advice. If your story begins with just a few basic characters, expand into a fully-realized universe. Remember, bingeability isn’t just about hooking your audience once, then serving them the same content over and over. Like almost everything in life, change is a natural part of the video content cycle.

Another bingeable idea to play with is gamification. While it’s already much easier than you might think to repurpose your old video as interactive content, there are other even simpler ways to transform your passive viewers into active participants. Easter eggs (hidden messages) can be a delightful method to keep audiences hyper-engaged as they try to spot secret visual jokes and references. By encouraging your potential customers to post or comment about these easter eggs, or by finding a way to further incentivize close-viewing with prizes, you can increase that engagement even more.

Really, incentivization is at the heart of all binge-able content. Whether it’s because of your video’s quality, its structure, its gamification, or a combination of all these elements, the core question remains the same: What are you offering your audience, that they should spend their time watching not just one, but several of your videos in a row?

Companies like Lemonlight offer terrific video packages that can help you create and release multiple pieces of content over time. But if you decide to go it on your own, remember that binge-watching is about more than cliffhangers – it is about filling a deep need for meaningful engagement. So take a moment to think about what your brand or business truly means to your audiences, and how you can deliver on that meaning through content. This is your story. Now go tell, one video at a time.