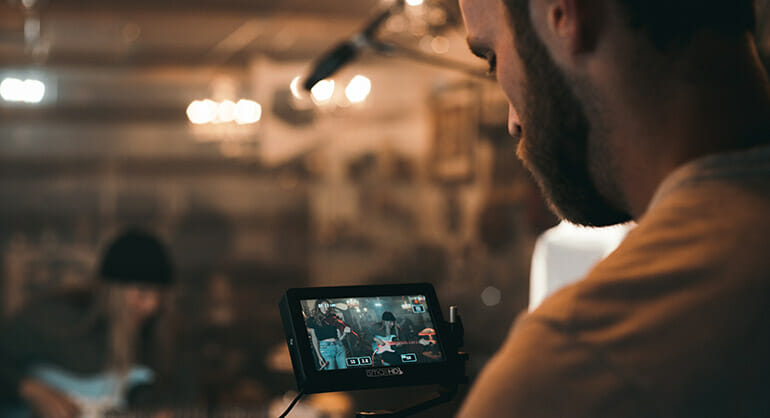 Music, theater, dance, and pageantry are defining aspects of countless civilizations, all tied up with thousands of years of religious rituals and ceremonies. They are deeply ingrained in our collective culture – in our hearts and in our minds, too. All of this to say, just because we live in an era of video content marketing does not mean that the value of “live” should be so easily discarded.

The first-ever live-stream took place just a little further down the yarn than the movie camera, in 1993. When a group of Palo Alto engineers tried to test their new platform for broadcasting on the fledgling internet by filming an in-office concert, their casual experiment inadvertently made history by live-streaming content on the world wide web for the very first time. Within a year, legendary rock band The Rolling Stones capitalized on the ultra-recent advent of this technology by performing a digitally-broadcast concert, cementing live streaming as a major force for cultural democratization around the world.

It might stand to reason that with the recent advent of ultra-affordable high-quality video content becoming available for businesses of all sizes, live-streaming would take a hit. However, numbers prove that the opposite has happened. Rather than declining over time, interest in live-streaming has increased. And instead of devaluing with advances in technology, if anything, the advent of accessible video has put live content at a premium.

Over 60% of people aged 18-34 watch live-streamed content regularly, and by 2021, live-streaming is expected to be a $70.5 billion industry all on its own. That’s a lot of time–and a lot of money–for tech that was officially born at an office party. And how many other decades-old content mediums continue to grow by 343% in a year – just on a single platform?

Combine all that with the fact that audiences can spend 3x longer watching live video than non-live video, and it becomes clear that live-streaming is an incredible opportunity no serious content marketer can afford to miss. But how can your brand learn from the past and take advantage of live-streaming’s growing possibilities?

The first and most reliable use of live-streaming is to share exclusive events with your audience as they happen. This was what its original creators did almost three decades ago, and what countless brands and companies across the world continue to do today – often with massive success.

Live branded vents can take an array of forms, from top-tier concert performances to intimate webinars, major sports events, and more. But why do so many people choose to engage with live content in this form when other, more established sources are readily available?

The answer comes down to a rapidly shifting content culture. According to Forbes, only two-thirds of US households still utilize traditional pay-TV subscriptions, and in the first quarter of 2019, over one million more people are expected to “cut the cord” as well. This means that a massive gap has opened in the way that audiences receive live programming – and wherever there is a gap, there is an opportunity for determined content marketers.

To properly connect with this generation of cord-cutters, try to think about why they might be dissatisfied with traditional media in the first place. For example, live-streams can act as a way to broadcast events that have been underserved by traditional media.

The biggest example of this is esports, where a Fortnite tournament recently set streaming records with a groundbreaking audience of over a million people worldwide – and that was just on one single stream out of the 100 that were participating. Armed with the knowledge that this enthusiastic audience is out there, looking for live content to engage with, you can strategically target them with your streaming.

The results? Over one billion impressions across multiple platforms and a piece of content that they can continue to use throughout an array of channels. Remember, live-streaming does not necessarily preclude content creation. It just adds flair and a sense of exclusivity that draws in more viewers.

Engage With Your Audience

Another major potential of live-streaming is the way that it can create a one-on-one relationship with prospective consumers. Many of the most popular live-streaming platforms make it super intuitive for audience members to engage with both the contents of the stream and each other; from open, ongoing public forums to specific prompts.

When it comes to streaming, interactive brands drive more leads. 21st-century customers want to be a part of the conversation, not passive participants. Even a simple shout-out on a live-stream can go a long way towards building brand loyalty, versus a less personal interaction like responding to a comment on a Facebook post or liking an Instagram post that they’ve tagged you in. We live in an exceptionally disconnected digital world, and seeing that you have made an impression on another human being in real-time can be invaluable promotion.

Ways to incorporate fan interactions into your live-stream range from Q&A’s to product demos to real-time rifts on the traditional telethon fundraiser. The possibilities are endless. Your brand can break down the details of a new feature, or respond to customer questions in a comfortable, open forum, rather than repeating it 1000 times in private.

Most importantly, live-streams can put a human face on your brand – an imperfect human face, featuring the occasional frozen frame or awkward pause, that contrasts with the too-curated narrative that dominates modern content marketing. In a world where 84% of Millennials say that they don’t like advertising of any kind, sometimes looking less than perfect is a better way to make an impact.

Live-streaming already has a proven positive impact on video content marketing, and signs seem to indicate that this trend will only increase. According to Facebook Live metrics, users tend to watch live videos three times longer than non-live videos, and comment ten times as much. 67% of people who watch a live-streamed event are more likely to buy tickets to that event in the future, which means that live streaming can even help directly convert leads at every stage of the marketing funnel.

By live streaming content, you have a rare chance to create personal connections with your current audience and actively convert new audiences at the same time. It is a golden opportunity with its roots in the distant past, but a sense of potential that only seems to expand throughout the future.

home chevron_right The How and Why of Live-Streaming Video Content