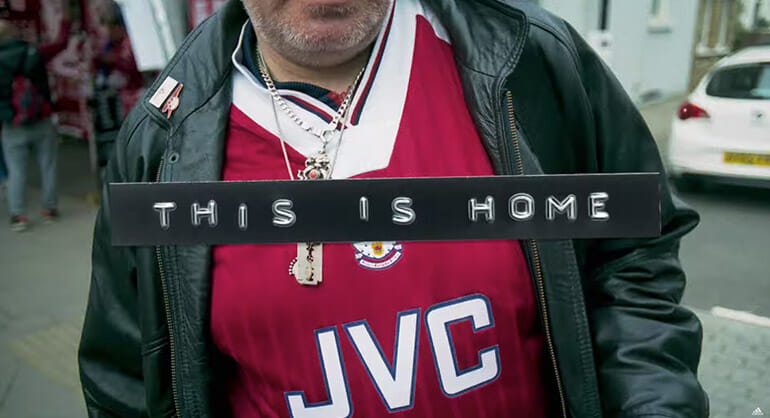 Nothing Beats a Video That Understands Its Audience, Like This Adidas Spot

It seems like it should go without saying, but knowing your audience is one of the most important aspects to successfully using video marketing for your business. We put a lot of emphasis on knowing your company’s why here at Lemonlight, because that passion, enthusiasm and purpose translates well with viewers. But there’s something equally satisfying when a video seems to know the customer’s why even more so.

That’s why, even though I don’t follow London Football clubs, this video ad for the Arsenal FC’s 2019/2020 team jerseys from Adidas stood out to me as an exceptional video. It just seemed to get exactly who it was for, and tap into that in a unique way.

The video begins with what are clearly actual Arsenal football (soccer) players getting fresh cuts in a barbershop as they exchange colloquial North London slang with thick cockney accents. Only there’s an important twist you might not get: these players don’t have that accent because they’re not actually from North London.

Cue Ian Wright, former Arsenal footballer and current studio pundit for the BBC Sport network, who joins in to explain the video’s key message to us: “You’re not born a Londoner. You’re made one.” As Wright continues about what it means to play for Arsenal and wear the jersey, the video feature more Arsenal players swapping North London slang in thick cockney accents, all wearing the jersey and stoked about the upcoming season.

These are players, just like Arsenal fans, who come from all over the world, but they are united by one fact: they wear the jersey and play for Arsenal. It’s a brilliant ad that knows exactly who its for and how to speak to them. Even if the voice-overs and dialogue of the players is a little cheesy, it’s all in good fun.

Watch the video here and then we’ll go over a few quick takeaways you can borrow for your own video marketing efforts. Keep an eye out for a fun celeb cameo, too!

Makes you want to grab a pint, get some brekkie, and watch the game, huh bruv?

Takeaway #1: To know your audience, know yourself.

This video is great because it has such a strong sense of self, it’s like a celebration. It features real places in North London and real players on Arsenal’s team, including a spokesman who used to be a player. I can only assume the fans kicking the ball around towards the end are real Arsenal fans too, all wearing the Arsenal jerseys with pride.

Without locking into that strong sense of personal identity, of what makes a North Londoner, and what makes Arsenal, Arsenal, the voice of the video wouldn’t be nearly as strong. Because the voice is so strong, it comes across in every aspect of the video. Everything from the pitch to the craftsmanship to the people involved, it’s clear that everyone was passionate about making this video because they love who they are.

In order to achieve a similarly upbeat, celebratory vibe for your own marketing videos, how can you better tap into your own personal identity? There’s something about you that has drawn business to you, whether it’s your personality as a business owner or your style and attitude as a brand.

That something that keeps your business going and keeps customers coming back that is worth tapping into and exploring, because it’s directly related to why anyone chooses to take their business to you in the first place. Know yourself to know your audience.

Takeaway #2: Focus on what your customers care about.

Football fans are football fans because they love football. Sounds obvious, but if you think about it, this video could have gone a very different route while sticking with the same theme. It could have been easy for Adidas and Arsenal to hire some North London actors to act out some scenes in Arsenal jerseys to promote what the real North London Arsenal fan is like. That might have came across as more like pandering than the approach they took.

Instead, by using real players, and adding the clever device of giving them North London accents, they kept the focus on the team and why the viewers are fans in the first place: for the football. Arsenal fans are loyal to their teams. Plus, it was fun for fans to see how everyone was changed and edited by the voice-overs. It was only towards the end that the focus of the messaging shifted towards the fans, and by then, the viewers were already plenty delighted and could easily accept the messaging.

In your own marketing videos, how can you keep your videos focused on the thing that your customers come to you for? Why do they choose you over the competition? What about your product or service do they feel strongest about? If you don’t know, maybe you can take a survey and find out what they love about you and your business in exchange for a discount coupon or free swag.

Takeaway #3: Use powerful messaging that speaks to the customer experience.

Even with the flashy editing, clever voice-over device, and celebrity cameos, the best part of this video is the messaging. It was such an important part of the video, they added subtitles – although I’m sure part of that was to help with the cockney slang.

Let’s look at a few of the key lines:

“If you stay real and come correct, we’ll make you invincible.”

“When you put on our shirt, you turn and face. You never hide. That’s how we create legends that never die.”

“That makes us Arsenal. That’s why we play.”

These are emotionally powerful statements, tied to personal identity and hometown pride. The last line from player Héctor Bellerín, whose accent is the only one who actually isn’t dubbed over, says it all: “What can I say man? North London’s home.”

The line perfectly tees up the video’s final message: “This is home.” Which is great, because immediately following that there’s a “post-credits” scene of Ian Wright getting called out to from an actual North Londoner. Wright’s response is great: “Go brush your teeth!”

So how can you use this for your own video marketing purposes? Simple: Write down what makes you do what you do, including why you think your customers choose you over the competition. Focus on the emotions behind your motivations, not just fancy buzzwords or “because we have the cheapest prices in town.” Write at least a paragraph or longer if you can.

Then, start to pick apart key words and phrases that stand out to you. Try to shorten it. Simplify it to just a sentence or two. Try to cut it down to four or five words, even. That’s your why.

Now, try to come up with a concept for how you can make a video around that messaging. Maybe you have more than enough to work with. Great! Use it for your script, or plan to make multiple videos around the different angles to your identity. The more personal while also universal you can make your messaging, the more human and relatable your video marketing will become.

home chevron_right Nothing Beats a Video That Understands Its Audience, Like This Adidas Spot