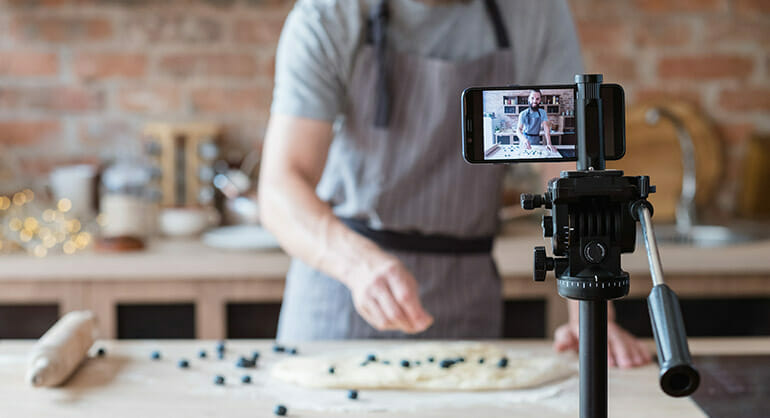 Learn How to Livestream With These 8 Best Practices

Most people are familiar with the concept of livestreaming these days. From big music festivals like Coachella livestreaming performances to the prevalence of Twitch for gamers and other content creators, livestreaming is everywhere. People enjoy it because it allows them to watch their favorite events and performers in real–time, without having to be there in person. Additionally, many people find it to be more interactive than traditional forms of media, as they can chat with other viewers and even the performers themselves in some cases.

As a marketer, obviously you understand the general concept—it’s live—and you probably already know you should consider adding it to your marketing strategy because it’s good for audience engagement, but that doesn’t mean you know how to do it.

That’s OK! That’s what we’re here for. Today we’re breaking down livestreaming, covering what it is, how to do it, why you should consider it for your business, and plenty more.

Livestreaming is the process of uploading video content in real time to viewers over the internet. Usually you use a device, like your smartphone or webcam, to connect and stream to a platform or channel where your audience can tune in live.

For example, you can livestream to YouTube, Facebook, Twitter, your own website, or to a service like Twitch that’s primarily all about livestreaming. Running a “Facebook Live” has become mainstream, where a business or influencer will host a live Q&A session with followers on the social media site through their company page.

But why should I bother with it?

While livestreaming is very popular among millennials and Gen Z, it’s not just for younger audiences. As LinkedIn noted in their LinkedIn Live announcement, livestreaming is great for covering new product announcements, live coverage of conferences or events, Q&As, FAQs, tutorials, day in the life videos, influencer partnerships, brand takeovers, earnings calls, ceremonies, and much more. And, hey, you also want to target young people with buying power too, right?

More specifically, livestreaming can be used as a tool to connect with followers in a way that often feels more genuine than just posting a video or responding to a comment. Many influencers and celebrities use livestreams on Instagram, Snapchat, and other platforms to form closer connections with fans, or offer livestreams as rewards for engaging with a certain contest or campaign.

You can use livestreaming in a similar way by showing off your company in an authentic way through behind-the-scenes content. By engaging with them directly during a live Q&A session, followers will feel more connected as they interact with you and watch you interact with others.

Even if you’re just having fun with co-workers in the office or on an event floor, livestreaming can be great way to humanize your brand and your team, letting your audience laugh along with you.

How do I create a livestream?

First, you need to decide how you’re going to record your livestream. From there, you’ll need to decide where you’ll stream it. If you’re just starting out, we recommend using an iPhone or mobile device and posting directly onto a social media site like Facebook or Instagram.

Most social networking sites have options to go live now, and some, like Facebook, make it as easy as clicking the “Go Live” feature when posting a status. On Instagram, livestreams are done through the “Story” section of the app, and when livestreaming to Twitter, you need to use the connected app Periscope, which (fun fact,) was actually the forefather to the Facebook and Instagram live craze – it just gets none of the credit.

Facebook has another cool feature – scheduling livestreams. If you’re planning on attending an event and livestreaming while you’re there, you can “schedule” the livestream for a certain time so your followers will be kept in the loop and notified in advance.

Similarly, when livestreaming on YouTube, you have the option to livestream directly onto your own live channel or create an event scheduled in advance, where you can denote beginning and ending times – like hosting an event on Facebook.

Can I record my livestreams and repost the footage?

Yes, you can. Some livestreams, like on Facebook, give you the option to save and immediately share a livestream once it’s concluded. In the case of Facebook, once it’s added to your Timeline, it becomes a permanent video, saved forever. Same with Periscope: while you can adjust the settings to delete the video after 24 hours, the default is to save it indefinitely.

As for Instagram livestreams, they can be shared onto your Story after they end, where you can save them to your camera roll or save the story to your company’s profile page with the “story highlights” feature.

When livestreaming on YouTube, you can archive your video and share it later, but you also have the option of sharing your livestream on other social networking sites. But fair warning – similar to posting a video link from YouTube onto Facebook, the great algorithm gods won’t prioritize it as much as a Facebook Live, so it might be better to keep them separate.

Beyond the options available on the social channels themselves, there are some tricky ways to actually download your live video and save it to your computer through the Facebook mobile app; but rather than go through the trouble, you can just use a simple screen recorder to record the content directly off your screen instead.

Does livestreaming grow your audience or just engage them?

While livestreaming is perfect for engaging audiences, it can actually grow your audience, too. Here are a few choice ways to grow your following while creating a live video:

Here are a few of our tips on how to handle yourself when livestreaming:

Don’t livestream just for the sake of livestreaming. Have a plan in advance so you know going in what points you want to hit, and what your goal is for the stream. Just like any other marketing video, you want to focus on either attracting an audience, engaging followers, nurturing leads, delighting customers, or some combination of the like.

No offense, but you’re not going to be Sandra Bullock or Brad Pitt on your first livestream, so don’t try to be. You can have your key points written down somewhere for reference, but don’t read them like a script. Be your authentic self – just with a mission and some key talking points.

The last thing you want is for some goofball to roll through and totally screw up your video.  Make sure you’re recording in as controlled environment as possible – sometimes, that means in a studio space with the door locked, or sometimes, that means partitioning off your booth at a convention for an hour to stream.

Make sure your headline and description accurately depict what the livestream is covering. Livestreams are oftentimes a revolving door – some will come and stay from the beginning, others will jump in during the middle, watch a little, and then dip after a few minutes. Be clear on the topic so nobody comes in late and leaves early just because they’re confused.

If a marketer held a Facebook Live in the woods at 3 p.m. on a Friday and no one knew about it, did it even happen? There’s no need to “go live” in a hurry if your audience doesn’t know to tune in. Promote and schedule your live sessions in advance so your followers can actually make time to watch! If it’s an important enough topic, they will come.

Don’t let your streams go to waste. There are absolutely multiple ways to save your streams, and most social platforms have built-in ways to help you share. They want people to watch just as much as you do, so don’t lose an opportunity by letting a livestream disappear forever.

You want your followers to engage? Host a livestream about things they actually want to engage with. Pay attention to your feedback – what do your customers care about? What do they want to know? What perks can you offer them? What discount codes can you give away to reward those followers you do come watch?

Like any good host, it can be easy to get caught up in keeping the party rolling that you forget to have a good time. Don’t forget to actually interact with and talk to your viewers. Why else are you doing a livestream? Engage!

Finally, work with a pro!

While livestreams can be pretty easy to set up on a mobile device yourself, if you’re thinking of tackling a livestream at a big convention or upcoming event and want some high-quality, affordable assistance, we can help! Our team of video experts are happy to cover events large and small, or help set up a series of livestream social videos. Reach out today so we can get started – the sooner the better, as real life never waits!

home chevron_right Learn How to Livestream With These 8 Best Practices