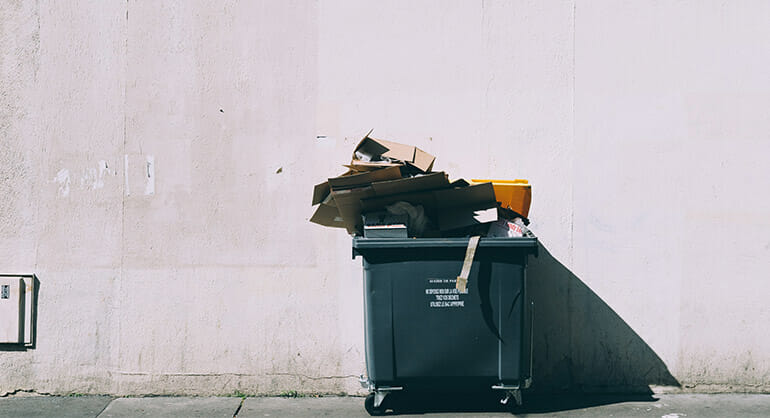 How to Create an Environmentally-Friendly Production

As a human, to be alive is to consume. Food, water, clothing, shelter…everything that we need to maintain our basic life functions are all consumed and, eventually, discarded in one way or another. We outgrow our clothes and need to buy new ones. Our shelters break down and must be repaired with fresh materials. And food…well, we all know what happens once we’ve digested a sandwich and stripped away its valuable nutrients.

The average American produces over 2,000 pounds of garbage  every single year. As a result, leaving behind trash can feel so inevitable that the very action becomes an afterthought, and no more concerning than the toxic carbon dioxide in our every exhalation.  But in an age of unprecedented environmental catastrophe, where young children have had to take on a role as the vanguard of conservation, it is all of our responsibility to minimize the negative impact that we have on the world.

This becomes especially true for those who work in (or adjacent to) content production. In an industry driven by outrageous deadlines and creative fervor, Mother Nature is liable to be one of the last things on your mind when you are trying to capture the perfect shot. However, rather than thinking of environmental consciousness as a burden, try to see it as an opportunity; a chance to make a positive change in your own habits and the world at large. With the right mindset, and just a bit of expert advice from your friends at Lemonlight, you can spearhead an environmentally-friendly production without ever compromising your brand’s unique creative vision – and save money while doing so!

We already mentioned how the production of trash and waste are deeply ingrained in the human experience. From our limited modern perspectives, no individual can truly perceive the way that these have dramatically scaled up during the past several centuries, thanks to a combination of industrialization and the rise of disposable goods. But when we take a big step back and apply a cool, objective eye to our routines, it becomes clear that in almost every facet of our lives are a myriad of opportunities to subvert environmental waste.

Nowhere is this more true than during filming. On-set, the two most valuable qualities of almost any product are its a) convenience, and b) scalability. Whether you’re feeding your crew, transporting your equipment, or constructing a set, these practical considerations will frequently drive the conversation more potently than any creative discussion. As if out of necessity, all talk of environmental soundness is overshadowed by making sure convenience and scalability are preserved.

But that necessity is false, and falls apart under any close examination. Yes, on a shoot, your primary responsibility is to guarantee that your production team is fed, sheltered, and made sufficiently comfortable to perform their duties. However, all of these can be accomplished without putting a proportional level of strain on the environment – and on your budget.

For example, one of the biggest and most-examined areas of environmentally-sustainable production is water bottles. In 2014, PGA Green (a non-profit arm of the Producers Guild of America) calculated that the average cost of bottled water for a 60-day shoot was $11,175. Even scaled back to match the capacities of a less lengthy production–as yours are far more likely to be–that is a truly staggering sum expended on something so trivial. And beyond the ridiculous cost, the hundreds of empty plastic bottles should be their own deterrent – despite what the blue bin might connote, less than half of all plastic bottles are eventually recycled.

Instead of buying pricey water bottles for your crew, why not explore some more eco-friendly alternatives? According to the Green Production Guide, you can effectively halve those water bottle costs by renting water coolers and providing compostable cups and reusable bottles. In addition to saving money and trash, you will also be taking a stand against the environmentally catastrophic fossil fuel industry. It already takes over 17 million barrels of oil every year to keep up with America’s demand for plastic water bottles, so any effort that you can undertake to counteract that demand has its own particular value.

Another simple, but ecologically harmful production habit is printing too many documents. When everybody in your cast and crew has their own printed script, the costs add up quickly – both in terms of money and lumber necessary to produce so much raw paper. Plus, with the advent of mobile and tablet technology, it is easier than ever for your production to go totally paperless. In one case study, the production team of popular HBO show Boardwalk Empire found that they saved over $100 per crew member just by switching from printed scripts to digital PDFs.

The examples of water and paper both prove how re-examining even the smallest, least impressive elements of your production can result in tremendous savings for both the environment and yourself. Creating an environmentally-friendly production isn’t about sweeping, inconvenient changes. The majority of it comes down to slight, nearly invisible steps, and a push towards overall optimization.

While cutting down on disposable products is one key way to keep your production relatively green, it’s even better when you can avoid “disposing” of something in the first place. Finding ways to reuse a key production element yourself (or making it available to others) will dramatically reduce its negative environmental impact, while simultaneously making it more lucrative for you. Think of this like buying a big plate of pasta and then, rather than eat it all by yourself, deciding to split your purchase with a friend. Which is the better deal: Getting one meal or two for the exact same price?

Simply throwing out used or extra production elements might seem like a financially-wise choice in the short-term, but there’s money to recoup for savvy producers. The 2014 Darren Aronofksy film Noah made back nearly $50,000 just by re-selling scrap steel from their production. Some major film studios are even looking to the past by putting together warehouses of reusable props, sets, and costumes that productions can draw on, in addition to more robust recycling initiatives. After wrapping production, award-winning sitcom 30 Rock donated nearly 11 tons of material to a Georgia prop house, which saved them roughly $20,000 in total waste-hauling expenses.

Decisions like these make it easier for future shoots to stay environmentally-friendly, while easing up on unnecessary manufacturing. While reducing your carbon footprint  is a noble goal, taking pre-emptive action can erase somebody else’s footprint entirely, long before it even forms.

Similarly, one of the best ways that a piece of branded video content can create a positive impact on the environment is to openly support and promote sustainability. More so than the actions of any single person or production, spreading awareness to the population at large will help generate a larger ripple effect. Think of it just like reusing a prop or piece of set dressing, but on a much larger scale. By going green in a big, public way, you will still preserve all the value of your branded video content, while also popularizing environmentalism and making the world a better place.

home chevron_right How to Create an Environmentally-Friendly Production