YouTube recently marked its 17th anniversary. Having started on Valentine’s Day in 2005, it’s safe to say that many people have grown to love the online platform as their go-to site for music videos, vlogs, sports highlights, and then some.

Averaging more than 1 billion monthly users, YouTube is home to lots of content from all around the globe. It’s little wonder why Google, the behemoth of our times, didn’t blink twice when making a buying decision just 18 months after YouTube was launched.

With the acquisition, the company was able to make that leap from a repository of amateurish content to a world-beater of original content. Recently, we’ve seen the rise of YouTubing sensations like PewDiePie and the Smosh Brothers in an era where social media influencers get to dictate how the average consumer feels about different brands.

With YouTube currently the undisputed champion of the online video space, now is probably the best time to dig deep and share just how pivotal the platform is.

There’s lots to love on YouTube thanks to user-generated content. For every minute that passes, about 400 hours of content gets uploaded. This has made YouTube ideal for even the most mundane topics like “how to boil an egg,” and “how to configure face ID for your new phone.”

Because YouTube has mass appeal, it’s an excellent resource to have if you can leverage it in your marketing campaigns. Remarkably, about eighty percent of people in the 18-49 years age bracket frequently use the platform. As impressive as this is, it would be remiss if we also didn’t share that about half of all web users aged more than 75 are on the platform. 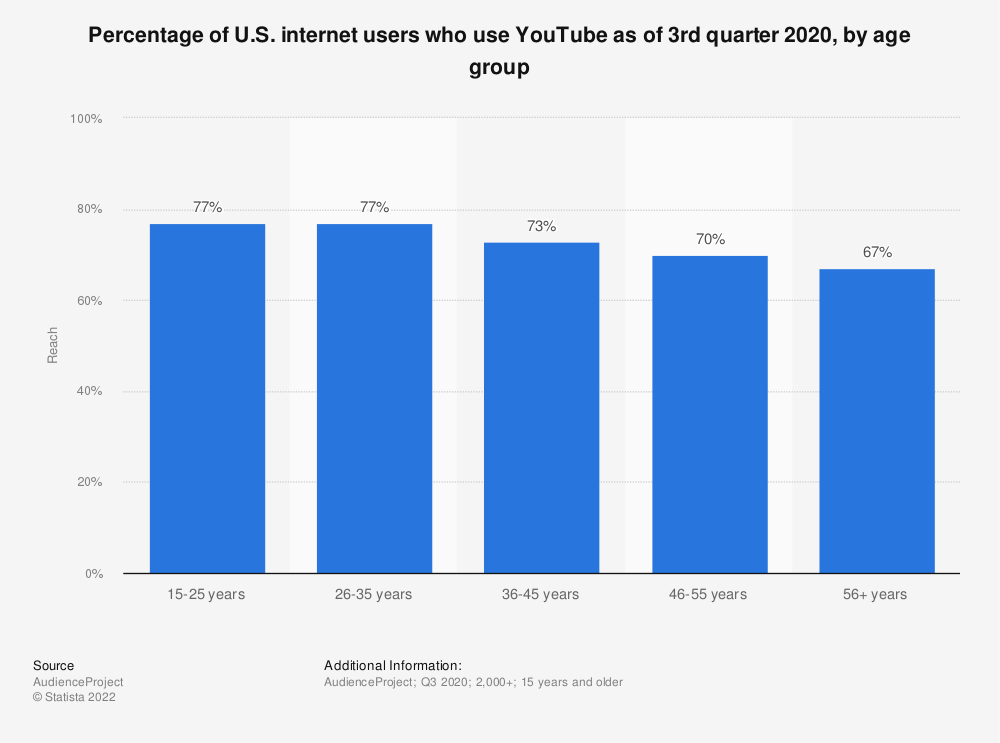 These numbers are important to have at the back of your mind as online ads are three times as likely to be viewed compared to television ads. As a marketer, this is without a doubt music to your ears as you can tell compelling narratives that your team can personalize to fit your needs before scaling upwards.

The “suggested video” rabbit-hole is one we’ve all fallen into one-too-many times—but, we’re not alone. World-over, people are clocking more than one billion hours of YouTube videos in a single day. If you do the math, you’ll realize that this number is higher than both Facebook and Netflix combined.

Notably, YouTube isn’t only popular on desktop devices. The rise of mobile devices forced the company to adjust its approach by devising mobile-friendly apps. This approach worked to great effect as the stats show that we spend an average of 40 minutes per session watching YouTube video content on our mobile devices.

While the tech may be the same, it’s hard to ignore that there’s usually a generational difference in the uptake of technology.

This review will help you gain a better understanding of the demographics at play when it comes to YouTube consumption habits from one generation to the next.

Millennials are an important demographic segment, but they may not necessarily be the most rewarding from a business perspective.

While ignored, Baby Boomers are the real deal. Not only are they mega spenders, but they also tend to spend a greater amount of time online than millennials. This augurs well for brands who are looking to get potential customers to have more screen time checking out their wares.

Despite Baby Boomers being part of the older generation (i.e., from age 55 and above), they still manage to notch about 24 percent of YouTube views—roughly  31 million people.

Understandably, one would assume that Boomers don’t have the time to spend in front of screens ogling at content. However, nothing could be further from the truth. Boomers love YouTube because it gives them the power to save time as complex topics in the tech world get broken down into easier-to-understand explanations.

This method of knowledge acquisition is quite appealing to them as they get to skip the middlemen knowledge repositories that take on the form of a know-it-all relative or a tech support specialist who likes using jargon in normal conversation.

Noticeably, Boomers are more likely to agree with data-driven product reviews than opinion-based reviews of items. Provided the content shared is concise and simple to understand, they’re willing to throw their weight behind certain ideas that tickle their fancy.

As a way of dealing with an empty nest, Boomers tend to prefer consuming video content to pick up on new skills such as learning how to play musical instruments, learn new languages, and how to set up themselves and their businesses for success in the brave digital new world. 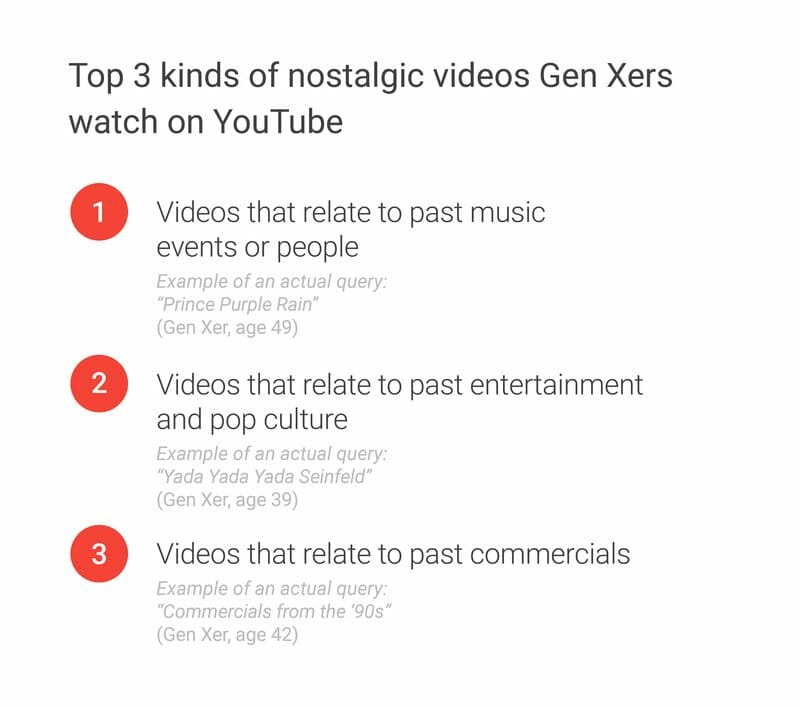 Having been brought up with change in the air, it’s hardly surprising that Generation X is the most adaptable of all generations. Think about it—most people in the Generation X bracket grew up believing that owning a TV (a black and white one at that), was as good as this life thing could go.

Today, scripted shows aren’t as popular and people want to see online content rather than stare at a TV set for an advertisement.

There’s an element of nostalgia with this generation. Most of them kill their time by rewatching old videos from their formative years (think high school years). Popular searches in their browsers include topics like “Six Million Dollar Man” and “Prince Purple Rain”.

With throwbacks being the central theme here, it would probably bode well for your business if your content includes popular soundtracks from the 60s, 70s, and 80s.

As nostalgic as they are, it’s also worth documenting that they spend a ton of time watching video content on their computers and mobile devices—more than they do on traditional media like television. DIY content on topics like home repair and cooking tends to rank highly in this respect. This is because such videos are usually not just informative, but also easily digestible by this generation.

Given the fact that the Generation X demographic logs about 1.5 billion daily YouTube views, you should come up with a plan to engage with them. Notably, they also spend lots of time on Facebook and Twitter where they share video content. This is important to remember as it will empower you to think about an omnichannel strategy to fully tap into the market.

This generation tends to spend lots of time ogling at their phones looking for the latest happenings around the world. With YouTube being a prime source of information, it naturally leads the charge in video content consumption by this demographic.

This is quite impressive as Instagram and Facebook Live have recently been knocking at this door in recent times. However, there’s that extra bit of appeal on YouTube that makes it stand out from other traditional social platforms.

Strikingly, millennials love watching short-form content as they don’t want to spend hours at a go reviewing lengthy content in a day. There’s also the fact that video content is more familiar to millennials as opposed to reading an article.

With YouTube, they get to pick and choose what media they want to check out not just as individuals, but as a community of like-minded people.

Given the fact that 90 percent of people hop on YouTube for product discovery, the platform’s algorithms have been tweaked to support this.

Remarkably, there’s a generally held belief that millennials don’t relate well with brands. While there’s no unanimous voice on this, the truth is that millennials (especially women) have no problem checking out sponsored content.

Provided as the ad is targeted to sort out their pain points at the right time, the reception to ads is usually brilliant. This just goes to show that as a marketer, millennials can help you improve your fortunes.

It’s the bold generation of our times. Having grown up in an age of influencers, selfies, and trending hashtags, they’re quite adept at navigating the sometimes murky waters of the social media scene.

As the stats show, they love to hop on Instagram and YouTube. This highlights just how dear video is to them. A good understanding of how they consume video content can help you as a marketer better learn how to connect with the audience.

An incredible 59 percent of this generation’s video consumption happens on social media platforms. While the natural assumption would be that they’re binging music videos, nothing could be further from the truth.

While the younger generation of yesteryear was obsessed with platforms like MTV, Generation Z is tuned differently. Most of them source their music collection from platforms like Apple Music and Spotify.

Having divulged this, it’s worth noting that YouTube still has a massive pull on their preferences. So much so that it wouldn’t be a stretch to suggest that it’s more influential in their lives than giants like Lego and McDonalds. Their go-to content includes product unboxing and reviews, humorous videos, and short engaging videos.

Shorts is YouTube’s new short-form video platform that is perfect for Gen Z and Millennial audiences who are used to consuming content in bite-sized pieces. A direct TikTok competitor, YouTube Shorts allows marketers to create engaging and conversion-friendly content that is easy to consume and perfect for those with short attention spans. Shorts videos are typically under 60 seconds in length, and because it’s a relatively new platform, there’s less competition for views, making it the perfect option for brands looking for new marketing channels.

There’s no online video discussion that’s complete if YouTube is not part of the fray. It’s set the pace for so long that other social media platforms have been forced to play catchup. In many ways, it’s the ultimate video repository that’s well supported by predictive algorithms and amazing search functionality, almost akin to the stranglehold Google has in the search domain.

Isaiah is the Senior Content Strategist at Lemonlight. He's been in the content marketing industry since 2014, starting as a freelance writer and eventually moving up the ranks to his current role. He’s a film junky, design enthusiast, and bleeds purple and gold—go Lakers!