Hashtag Game #OnPoint – How To Be More Impactful with Hashtags

If you’ve ever tried to make something go viral on the internet, you know what a hashtag is. It’s the # symbol your parents told you was a pound sign or a hash, depending on what country you grew up in. But times have changed. No matter where you live, the only internationally recognized term for the # is the hashtag.

Hashtags make it possible for users to engage in online discussions based on select topics, making the topics and conversations easier to locate online by arranging them through clickable categories. Ever since hashtags started “#hashtag-trending” back in 2007, hashtags have become a vital part of the way we experience and filter content on the internet, and are incredibly valuable to online marketing. As of a week ago, you can even put clickable hashtags in your YouTube video titles!

But what’s up with hashtags, really? Do you really need them? The short answer is yes, and the long answer is below! Keep reading for how hashtags work and why you definitely need to use them in your video marketing.

#TBT – A Brief History of the Hashtag

Stop me if you’ve heard this one before: It’s August 23, 2007, and social technologist, digital designer, writer, and “hashtag inventor” Chris Messina tweets the following:

how do you feel about using # (pound) for groups. As in #barcamp [msg]?

Okay, so Chris didn’t “invent” the concept of using the # symbol online. As it turns out, the hashtag, then called hash, was being used by old school coders on the IRC, or Internet Relay Chat, to provide shared context for conversations since as far back at 1988. Chris took this idea – that of a shared conversation – and brought it to Twitter, using the hashtag as a sort of conversation label.

As he tells it, he even rolled into the Twitter headquarters and pitched it to Twitter co-founder Biz Stone directly.

It only took Twitter two years to catch on, but in the meantime, Chris popularized the concept with the Twitter community after suggesting a concerned San Diego resident by the name of Nate Ritter use the hashtag #SanDiegoFire to spread the word about a dangerous wildfire affecting the county. The pair used the hashtag on every post, and it caught on like, well, wildfire!

In 2009, Twitter finally built an automated search function associated with the hashtags, creating the viral-inducing sensation we know and love today. And ever since, hashtags have been adapted and implemented by every other relevant social media platform. Hashtags were included in the launch of Instagram in 2010, adopted by Facebook in 2013, and have since been incorporated wholeheartedly by Tumblr, Pinterest, and most recently, YouTube.

Chris is understandably shocked at its widespread growth, but happy about what he’s seen. 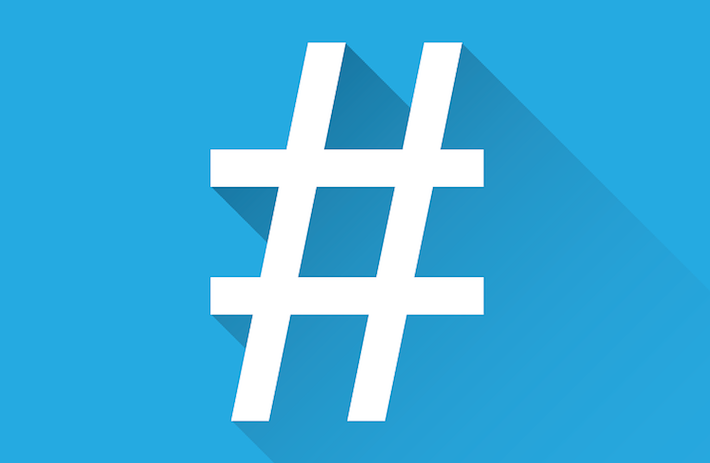 Today, hashtags have transcended beyond social media. Full on marketing and advertising campaigns have a single hashtag as their core. Billboards promoting movies frequently feature hashtags as well as social handles to find out more. Political movements are defined by their hashtags, like #MeToo, #TakeAKnee, or #Covfefe.

Hashtags are ingrained in our American culture, but cultures all around the world use it too. Just lookup #WorldCup for a taste of how the world interacts online. The hashtag truly is a universal tool and a global social networking phenomena, and it’s not going away anytime soon. As the internet continues to expand, we will continually need to invent new ways to organize and understand it. Hashtags are a great way to collect ideas and content and categorize it for easier identification and consumption.

How to Use Hashtags on Social Media

Tired of seeing thousands of posts go by, shaking your fists to the skies at kids these days and their newfangled hashtags, wondering “HOW DO THEY WORK?!” We were too, but then we did a little research and here’s what we found out.

Say you’re tweeting, facebooking, or instagramming about the finale of TV’s latest hit sensation, Box of Swords. In order to pipe your comments into the larger discussion, you include #BoxofSwords into your post. Now, when you or someone else clicks on the hashtag, every post with the same hashtag shows up in its own individual newsfeed. You can reverse engineer this by typing “#BoxofSwords” into your favorite social network’s search bar to similarly find content.

Now, say you have a fitness product and you’re trying to let the larger fitness community know you’re out there. The ideal course of action is to seek out popular hashtags related to your products/services, or relevant to your target audience.

You can start with the obvious, like #fitness, #fit, #training, #fitnesstraining, but to get the best results, you’re going to want to look up the most popular hashtags in your chosen field first and foremost, as its best to use no more than 10 hashtags at a time.

We’ll get into more tools to look up relevant or trending hashtags in just a moment. However, most social networks include a list of trending hashtags which allow users to see the latest news and popular topics in real time.

Hashtags are a great way to collect ideas and content and categorize it for easier identification and consumption.

Go to Twitter’s homepage, and you’ll find a sidebar on the left-most side with all of the day’s trending hashtags. Even go to the Search function of Instagram, and the third search option after “Top” and “Places” is “Tags.” By finding out what’s trending, you can join high-traffic, relevant conversations to attract new followers to your social pages. Just make sure you’re jumping into a conversation you can contribute meaningfully to – not just because it’s a trendy topic!

How to Use Hashtags in Video

Using hashtags to get your video in front of the right audience will depend on whether or not your chosen platform supports hashtags. Luckily they now work on most social networks. Until 2017, hashtags were frowned upon on LinkedIn (for fear people and brands would just repost Twitter content.) But now, LinkedIn, along with Facebook, Instagram, Pinterest, Google+, Tumblr, Twitter, and more all support categorizing content via hashtags.

As of last week, YouTube made it possible to use hashtags in a video title or video description to help viewers find your video when they search for a specific hashtag.

First, upload your video to YouTube. While doing so, enter your relevant hashtags into your video’s title or description. These hashtags will become hyperlinked, no matter where you put them. However, if you don’t put a hashtag in the title, but do put them in the description, then the first three in the description will show up above the video title. Any of these are clickable and will take you to a related videos page full of similar videos.

Keep in mind – the hashtags you use on YouTube have to fit the YouTube community standards. In particular, YouTube advises using as few hashtags as possible. The more tags on a single video, the less relevant they become for users searching for that hashtag, and if your video has more than 15, YouTube will ignore them all. Additionally, YouTube warns not to post misleading, unrelated, inappropriate, or hateful hashtags.

Beyond a quick Google search or the in-app search functions, how do you find trending hashtags? We’ve collected a couple powerful resources that you can use depending on what exactly it is you want to know. Keep in mind, some of these are paid services with free trials, but can be powerful if you have the budget for it.

Do I Really Have to Use Hashtags?

By now, you know if you aren’t using hashtags, you’re losing out on the better SEO and better engagement that comes with being a part of trending conversations. No need to go hashtag crazy – most platforms like YouTube penalize too many hashtags. Keep your hashtags on topic, and pick topics that are topical, and you’ll do great.

If you’re looking for a video team that can help you create quality content worthy of any hashtag, reach out! Our team of creative producers are here and ready to bounce ideas around and share their expertise with you and your marketing team to create something beautiful together. Schedule your call here and let’s chat today.