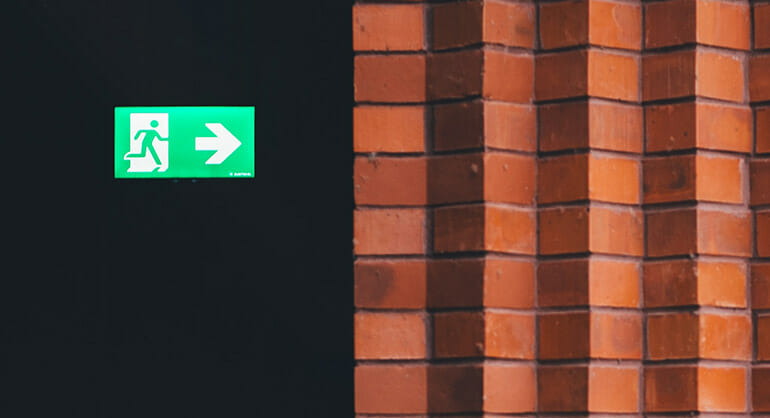 A call-to-action (CTA) is the most critical part of any piece of content. It’s the component that drives users to act, and its strength (or weakness) will likely determine the success of the content itself in serving its intended purpose. To put it simply, CTAs are worth spending some time on.

CTAs can exist almost anywhere, and they should definitely be included in your video content. Whether you include the CTA verbally in the video’s dialogue, add it to copy surrounding the video, or even overlay it on the video itself as a button, your videos need strategic CTAs. To this end, here are our top seven tips for creating a strong video call-to-action that your audience won’t be able to ignore.

1. Align your CTAs with the video’s goal.

If your goal is to get people to sign up for your email newsletter, a CTA leading viewers to watch a second video is not helpful. Neither is sending them to your homepage, or asking them to follow you on social media. Your video should have been created with a specific goal (or goals) in mind, and your CTA should make this goal crystal-clear for your audience.

This video, for our client Buster, is a crowdfunding video to promote their product on Kickstarter. To that end, the CTA asks viewers to support their campaign by contributing funding on the platform. The CTA aligns perfectly with the goal of the video, strengthening the impact of the content.

Too often, brands will include a video CTA that says something along the lines of “learn more here!” with a link to their website’s homepage. This might be more useful than not including a CTA, but your audience still has to do the heavy lifting of tracking down the exact part of your website that’s useful to them. Cut out this step by anticipating the information they’ll be looking for, and link them directly there instead.

While you’re at it, tailor the copy for your CTA to reflect the page you’re sending viewers to. Maybe instead of “learn more here!” you could say “click here for more product explanations” or “view client testimonials here.” Give viewers a hint about what they’re going to find when they click through, and they’re more likely to be enticed to take that action.

3. Place a CTA at the beginning of the video.

You probably know by now that audiences’ attention spans are shrinking in the digital age, and very few people watch a video all the way to the end. So, why are so many video CTAs placed in the last few seconds of the clip?

Even for those who watch your full content, it’s common for viewers to close the window when they realize the speaker is wrapping up and doing any kind of promotion for other content. Save yourself from this dilemma by including a CTA at the beginning of the video, while you still have a captive audience. You can always include another CTA at the end, but this way you have your bases covered early.

4. Make sure your CTAs are effective on mobile devices.

Video consumption is increasingly taking place on mobile devices, so make sure your CTA is just as effective on a smartphone as it is on a desktop. This is especially important for CTAs that lead to forms or other intake processes. For example, if your newsletter registration form has 10 fields to fill in and they don’t all fit on a smartphone screen, consider cutting your form down to the three or four most important fields and ditching the rest.

The key is to make sure your CTA is easy to engage with on mobile devices and to change up your approach if it’s not. You could have the most effective desktop CTA of all time, but if it’s not working on mobile devices, you’re still doing yourself a disservice and missing out on a significant traffic opportunity.

5. Make your CTAs verbal and visual.

Video CTAs are unique because you can make your CTA both verbal and visual. Take advantage of this by utilizing both approaches for the same CTA. Make your ask in the dialogue of the video itself, whether that’s a speaker on camera or a voice-over, and then add on-screen text as a button or other call-out to make it easier to click through to your desired location.

This ensures that your CTA gets through to your audience in any scenario, whether they’re watching with the volume muted or listening while they scroll in another tab. You never know how much of someone’s attention you actually have while they’re playing your video, so double up on your attempts to grab attention to increase your CTA completion rates.

This video for our client JDate was intended to drive social engagement, so the CTA asks viewers to join the conversation about food with #heyrachel on Twitter. The actress in the clip invites people to tweet about it verbally, and then the hashtag is shown on the screen. This is a great example of combining visual and verbal CTAs to support the overall goal of the content.

This is an easy step that content creators often overlook: Make your CTA exceedingly obvious to viewers. Don’t hide it in the video’s “about” language or allow it to get lost, like small, dark text over a busy background. You don’t need to be obnoxious or distract from the real content of your video, but take the extra time to make sure your CTA is visible, clear, and noticeably clickable.

This might mean adding a white box behind your text to add some contrast or adding an arrow to point to the area of the screen where the CTA will be. These tiny tweaks will make your CTA easier to find, strengthening your overall message.

Finally, as with most content suggestions, keep your CTA concise. This isn’t the time to spend two minutes of your video talking about the benefits of your email newsletters, or to make a button that says, “Click here to reroute to the sign-up page for monthly email newsletters from our marketing team.” Long-winded copy has its uses and benefits, but a CTA isn’t one of them.

As a test, try taking words out of your CTA to see if the core message is still the same. In the above example, we could cut everything except, “Sign up for our newsletter,” and the message is still generally intact. The ability to take out these words likely means they don’t need to be there in the first place, so play around with removing excess information until you’ve cut the CTA down to its core meaning.

Use these tips to create strong video CTAs, and watch as your completion rates improve. Your marketing team will thank you!

If you’re not sure what CTA you need to match your goals, give us a call. As digital video experts, our team of strategists can help you develop the right CTA for each of your videos and their intended uses.