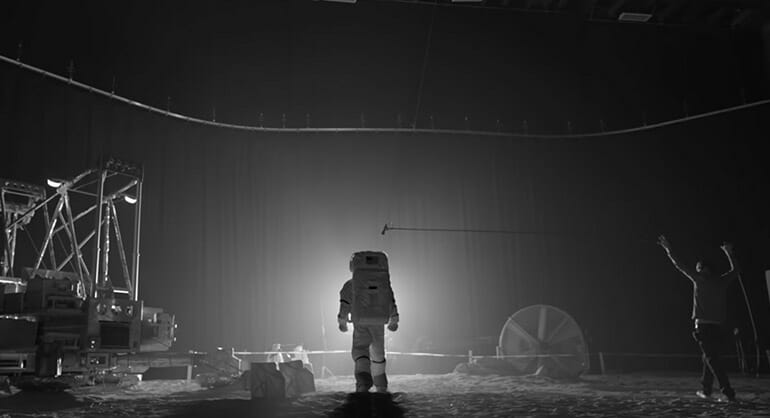 On Monday, arguably one of the most important tech companies in the world unveiled one of their most anticipated new projects to date: the Apple TV+ streaming service. Offering original programming, as well as channels to connect other streaming services, Apple TV+ is the tech behemoth’s answer to Netflix, Disney, and Amazon’s own content streaming services and stands to be a major contender in the upcoming streaming arms race.

Whatever your thoughts on the star-studded presentation and announcement itself, whether it be underwhelmed, hyped, or mixed, there’s no denying that Apple released one killer promo video to promote and hype the talent behind their new streaming service.

Take a look at it below.

In addition to being a master class in filmmaking from some of the greatest directors and performers in cinema, the video itself is a masterpiece. The video is like a love letter to moviemaking akin to something you’d expect to see at the Oscars – only ironically, it’s in promotion for a tech company offering a new way to watch TV online.

Normally, we’d break down the video and dive into the techniques you can borrow to wow the crowds with your own video marketing, but since this video features actual video making advice from some of the film industry’s greatest, we’ll let the experts do the talking.

Here are five takeaways from the storytellers behind Apple’s Apple TV+ promo video.

“Want me to help you find your opening?” Steven Spielberg asks at the beginning of the video, before immediately going into his take. “I would start with a black screen, and I would put a little speck of light at the center of the black screen, and I’d have the light grow in intensity, and then like the big bang, it explodes!” Geniusly, the video takes his advice, following his pitch pretty much word for word, but with a little glimpse of Steve in the middle.

Steven Spielberg has long been considered the master of manipulating audience emotions by hinting at something larger, more epic, just out of reach. Just imagine his most famous movies, like Jaws or Jurassic Park, when he uses those shots where a character is wowed by something off screen while we as an audience are left imagining what they might be seeing. When we see it, we too are tricked into being amazed. That trick is, in and of itself, amazing at how well it works when done correctly, and the whole concept of hinting at something larger on the horizon is a perfect metaphor for Apple TV+.

But the trick Steven Spielberg, and by extension Apple TV+, is using here is building our anticipation by hooking us right away. What, you mean you’re not going to listen mesmerized to Steven Spielberg pitch a movie opening?

While the Apple promo video doesn’t start with an actual bang, it does start with an emotional one, and we’re ready to go on this adventure ride with cinematic superheroes like Spielberg, J.J. Abrams, and Ron Howard as they explain their personal connections to making movies. You, too, should use a similar technique in your own marketing videos to hook audiences early and keep them invested in your video’s story.

“I begin to believe that there’s something of myself that I can share with an audience. If I’m thrilled, that’s a good sign. If I’m laughing, that’s a good beginning,” says Ron Howard. The Apollo 13 and A Beautiful Mind director’s advice rings true, even when it comes to creating marketing videos.

While most marketing is done in the service of promoting and creating more business, you should always promote your business based on how your product or service can service the customer. In the same way, when you create a marketing video, you want to tap into that feeling you get when you think about your business. What do you love about your company? What thrills you about your product?

Take that to the story level now. What part of you and your company are you sharing in your video? What excites you about the story of your product? What’s hilarious to you about your goofy TV spot? If you can get it right with yourself, share it with your employees, friends, and family. If your ideas and vision win over more folks than not, then you’re onto something. But it needs to start from some place true to you, first.

3. Writing is the hardest part.

“I find writing to be the hardest part,” says Lost in Translation director Sofia Coppola. She’s not wrong. Writing, while difficult, is so important to any story or video. Even if you’re just writing a treatment or outline for a short video ad, it’s important not to skip the writing process. As Star Trek and Star Wars director J. J. Abrams, puts it, writing is “the spark, it’s the living with the thing. It’s the outlining of it.” Ron Howard even admits to “writing and rewriting for months and years.”

Oftentimes, the most difficult barrier in making a movie is having the right story. So many movie scripts get denied before ever getting read by executives with the power to green-light movies because of obvious flaws in the story – even potentially good scripts with only a few mistakes. Meanwhile, in the age of YouTube, any old business can throw a marketing video up online in seconds without even a second thought. And a lot of times, it shows.

Sometimes our video marketing ideas come to us instantly; other times, it’s a grueling process akin to pulling teeth. Whatever your process for writing, writing is important, so don’t forget to write your ideas before you try to shoot them!

4. “You have to think about the environment the story exists in…”

“… How are you going to create that environment?” Ron Howard asks. J. J. Abrams goes on to ask, “What’s the look going to be? What’s the tone? What’s the palette? How’s it going to work?” These are all questions that directors ask themselves going into any project, considering everything from the story and the cast, to the costumes, the props, the set design, and more.

When creating your marketing videos, you too need to consider these elements. Maybe not for every video you create, but certainly in any advertisements, lifestyle videos, and even promo videos, like this spot for Apple TV+. Consider how they shot the interviews with their principal talent on an actual movie set, and used actual props and sets with working lighting and rain effects to accent and underscore key moments and ideas in this video’s story – the same as these directors might do on their own movies.

When we create videos, we’re essentially simulating a version of reality. When you create a lifestyle video, you don’t want the viewer thinking about how you shot the video – you want them envisioning their life, or the life they want to live. To do that, you have to bring the world of your video to life.

“You definitely go in with a very concrete sense of what you’re aiming for, then you have to be willing to throw it all away,” says La La Land director Damien Chazelle. No truer words about video production have been spoken.

Now we know that might sound contrary to what we just said about writing, but Chazelle isn’t telling you not to have a story. He’s saying don’t be so rigid in your plans that you can’t improvise. As the saying goes, hope for the best, but plan for the worst. Or, more appropriately, brush up on Murphy’s law and plan, because everything that can go wrong, will.

As J. J. Abrams says, “It’s not a big deal when it’s just you and a pad of paper, but when it’s countless numbers of talented people who are all waiting around and the sun is going away… The pressure is on, and it’s… Horrifying.”

While your own productions won’t be nearly as daunting as a Star Wars set with hundreds, sometimes thousands of crew members, you’ll have similar time constraints, with crew and actors all waiting for your direction. It’s important to know what you’re doing, but more important to be able to roll with the punches.

6. Fear of failure is good.

“Fear is good… At least for me, it’s good,” says Steven Spielberg. “The fear of failure is a kind of octane that keeps me wanting to stand on the edge of the abyss, but at the same time not plunge to my career death.”

If you aren’t taking any risks, then it’s likely true to say you won’t be reaping any rewards. This is true in business, even as we’re trying to mitigate risk as much as possible. But name any massively successful company, and there are plenty of risks taken along the way.

Taking risks in your video marketing is good, too. In a way, any investment in video marketing may feel like a risk in and of itself. However, when done correctly, the benefits far outweigh the risks, especially if you’re working with a video team who can keep your costs down and knock it out of the park with a high-quality video.

7. “Nothing works if the themes don’t connect with the audience.”

This quote from Ron Howard is so true, especially for marketing videos. If your video doesn’t have a core “why” at the center of it, in fact, if your whole company doesn’t, then your video won’t connect with your audience.

That doesn’t mean your theme has to be super emotional. It just has to connect with something real. Something funny and true can connect with audiences – but does that joke relate to your core messaging? Take this quote from J. J. Abrams as inspiration:

“Finally, you wrap the project and then it goes out into the world and you hope that all of these decisions that you were a part of, that you collaborated on, it will move people and touch people in a way that seemed like it was inevitable.” If your theme and core message connects to an audience, they will recognize it, remember it, and ultimately, remember you.

If you make your audiences forget themselves, even for a minute-long marketing video, then you’ve done your job well.