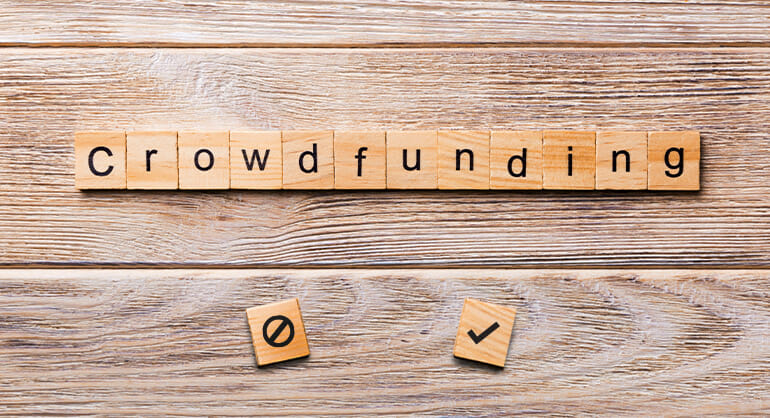 Whether you’re an artist or an engineer, an aspiring designer or an entrepreneur, crowdfunding has carved out an essential niche for creators across the world. Through innovative platforms like Kickstarter, Indiegogo, and Patreon, anybody anywhere can put out an accessible public initiative for fundraising that democratizes the creative process. Rather than waiting for higher powers to endorse their ideas, creators today can turn it over to the people instead. If a viewer supports the ambitions of a particular project, a couple clicks is all that it takes for them to go support it financially as well. Crowdfunding’s popularity is matched only by its global success; by 2025, total crowdfunding for individuals and companies worldwide is expected to reach $300 billion.

Though there is nothing more important to a successful crowdfunding campaign than a strong concept that resonates with audiences, even the most ingenious pitches can falter without the proper support behind them. A number of factors play into whether your crowdfunding campaign will fly or fall, and unfortunately your initial idea–no matter how brilliant–is just one of them.

From providing compelling incentives for backers to maintaining updates and creating tons of compelling video content for your page–examples of which we’ll feature below–crowdfunding can be a full-time gig. Taking it on is no easy task, which is why only 37% of Kickstarter campaigns meet their goals.

But if nearly two-thirds of all campaigns fail, how can you keep yours from becoming just another crowdfunding casualty? Well, to lend a hand, here are four of the most common crowdfunding mistakes, as well our advice on how you can expertly sidestep them.

When launching your very first crowdfunding campaign, you may naturally assume that you have time on your side; at the very least a few days to ease into the experience, get acquainted with your chosen platform’s quirks, and put together a strategy as you go along. However, the first 48 hours of your campaign are actually some of the most important to take advantage of, which means that your work starts much earlier than you might expect.

It may sound contrary, but your first round of crowdfunding should actually take place before you officially go live with your campaign. One of the hardest parts of fundraising is spreading the word about your campaign on the platform itself. Because of these platform’s algorithms, the more money that you raise during your first 48 hours, the higher the chance you have of being “featured” and attracting new backers outside your immediate social circle. To that end, before your launch, try and persuade as many people as possible to commit to funding as soon as your campaign is live. Friends, family, and coworkers are all ideal targets to hone in on – the sum they give isn’t as important as their overall numbers, and the tight span in which they donate.

They say that when you’re being introduced to someone new, you never get a second chance at a first impression. The same is true for crowdfunding, where a lack of essential groundwork can sink your ship before it even sails out of the harbor. One of the best ways to make a strong, positive first impression on potential backers is a pitch video. Because these are optional, some aspiring crowdfunders assume that they can just skip it to save some time and money. However, crowdfunding campaigns with videos raise 105% more money than those without, so featuring a video on yours is “optional” in only the loosest, most technical sense. If you really want to succeed, you need one.

But just including a video doesn’t mean that you’re set – not if the video itself isn’t any good. Optimize your pitch video by keeping it short, snappy, and stylish; campaigns with videos that come in at under five minutes are 25% more likely to reach their goals than those that go longer. Content-wise, tell a story that your ideal audience will want to hear. Make sure you are intimately familiar with your brand’s customer persona before shooting so that you can custom-craft a narrative that appeals to their specific pain points.

In the same way that your crowdfunding responsibilities start far earlier than most first-timers might expect, they also continue a lot later than you were probably hoping. Like a space shuttle launch, the initial blast might be the most impressive moment–and the most obvious harbinger of future success–but the mission doesn’t end once the ship leaves the atmosphere. Constant vigilance and course corrections are necessary to keep things running smoothly, which for a crowdfunding campaign means actively engaging with backers and continually posting new content for each financial milestone.

Never treat your crowdfunding launch as a one-and-done deal. Campaigns that share regular updates raise 126% more than those that let their initial offerings sit there, unchanging. After all, if you were considering investing in a project, wouldn’t you want to know that it was actively being worked on by its team and brought closer to fruition every day? Updates and small, intimate content releases (behind-the-scenes photos, blogs, etc.) keep existing backers committed and encourage potential backers to take the next step.

Crowdfunding is only one part of creative development. After that comes production, promotion, distribution, and any number of additional challenges that every brand must face in getting their product or service to the world. That is why, no matter how excited and confident you may feel, it is essential that you do not overhype or overpromise during your campaign. Doing so risks potentially spoiling the good will that you (hopefully) accumulated throughout the crowdfunding process, and leaves you with a lot of backers criticizing your brand before you’ve even opened up to the public.

The situation gets even dicier if, instead of just a delay, you cannot actually follow through on the deliverables (such as backer rewards) that were initially promised. Backing can fall through in an instant, leaving you with less money than if you hadn’t tried to crowdfund in the first place. Remember, if there’s one thing that audiences appreciate, it is authenticity and honesty from the brands that they choose to buy from – overpromising and under delivering reneges on that sacred consumer bond, making it considerably less likely that you’ll be able to drum up support for future endeavors.

When handled properly, crowdfunding can be an incredibly empowering boon for new brands and innovators. By avoiding these four mistakes (and collaborating with a production company like Lemonlight to perfect your video pitch) you can raise more funds than ever before, while building a better relationship with your audience.