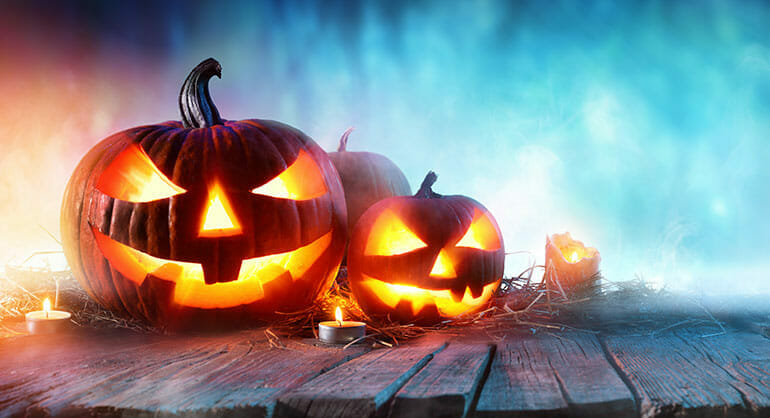 12 Best and Spookiest Halloween Videos of All Time

The lights are dim. You’re home alone when suddenly – the lights flicker and you hear a loud crash. Was it your imagination, or just a scary commercial playing during your favorite series?

Halloween means not only an uptick in scary movies and shows, but an uptick in outrageous, scary, and sometimes funny horror-themed video ads. Annual Halloween expenditure alone amounts to approximately $9.1 billion, so if you’re looking for a year-end boost in sales, this is one of the best times to invest in a good video marketing campaign.

With Halloween just around the corner, we thought we’d give you a little inspiration. Check out some of the best video marketing campaigns we’ve seen and start thinking creatively about how you can use video this time of year.

Kudos to LG! This creative prank is not only filled with the perfect dose of frightful Halloween spirit, it also does an amazing job showcasing the hyper-realism of their LED screens. Add the behind-the-scenes footage of the making of this death-defying elevator, and you’ve got a killer video perfect for the season.

How many dolls does it take to inspire a few nightmares? This little girl isn’t ready to find out. This ad for Halos tangerines uses a common horror film trope – creepy identical twins à la Stephen King’s The Shining – to scare us, and then a hilarious end that (thankfully) relieves the nail-biting tension.

Just a tad bit creepy, this ad for major UK retailer Asda is a fun, mesmerizing, high-production value trip down memory lane, thanks to the musical selection and classic costumes. It also shows us an amazing Halloween ad doesn’t have to be particularly clever or especially frightening to blow us away!

Every Halloween, Burger King goes big. A not-so-subtle jab at their competition, Burger King decided to give a free Whopper away to anyone who came in dressed as a clown on Halloween night. It went straight for the jugular, even depicting the main antagonist as a Ronald McDonald look-alike. All we can say is, we hope they had enough Whoppers!

Not a commercial, and a relatively cheap way to create some amazing video content, this supermarket Halloween prank is one of the best we’ve seen. The reactions are great, the main actor is hilarious, and say what you will about Natty Light, their Halloween marketing is on point.

Think you can’t create Halloween content because your product isn’t directly related to the season? Think again! Fanta surprised us by created this totally immersive VR experience – one of the scariest advertising campaigns we’ve ever seen. Along with two physical VR locations, Fanta drew young audiences in with a complete 4D video posted online, print advertising, package elements, and more.

An oldie but goodie, this classic Snickers commercial is weird, disturbing, but still laugh-out-loud funny. Granted, we expect candy and chocolate brands to kill it during Halloween, but they prove time and time again that they know how to take the absurd to the next level.

Just watch it and try not to laugh.

One in a two-part series, this State Farm ad builds suspense, makes your skin crawl, and just when you’re about to jump out of your seat, surprises you with a twist ending you’ll love. It mirrors their brand mission of being a good neighbor and helping you when you need it most, even in the scariest of moments.

OK, this video isn’t exactly spooky, but it does provide an excellent example of how you can build a narrative for the season without any major scare tactics. As a matter of fact, it’s sweet and heart-warming – a thing you don’t often see during Halloween. Tug at the heart strings, and you’ve got a winner.

Did we mention Snickers is good at Halloween advertising? This tongue-in-cheek ad is punny and does something different than most of the other ads on this list – it starts out funny and takes a darker turn toward the end.

Another take on The Shining, this commercial leaves us uneasy from the very beginning. We’re following a young boy on his tricycle, immediately conjuring up images of Danny Torrance, but this time, we’re roaming the passageways of an Ikea store and seeing some beautiful furniture, appliances, and decor. It’s scary, yes, but also leaves us ready to shop!

This commercial plays more like a short film, detailing an investigative story and amazing twist on a classic fairytale. What if there was more to the story than a big, bad wolf simply blowing down the three little pigs’ houses? Turns out, there’s insurance fraud, conspiracy, even public outrage at play, and The Guardian is there to report it all.

home chevron_right 12 Best and Spookiest Halloween Videos of All Time